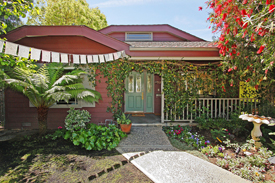 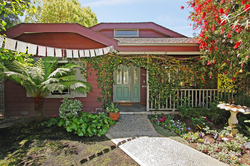 "It had multiple offers," said Dawn Robertson, one of O'Neill's real estate agents, "and we thought we'd go one dollar over what we thought the others were offering. We got it."

The Spanish-style two-story house, built in 1927, has a living room with a fireplace, a formal dining room, a sitting area in the updated kitchen, a den with a fireplace, an office/library, three bedrooms and 2  bathrooms. A detached guesthouse contains one bedroom and one bathroom. The property also has a swimming pool.

It's a move up for O'Neill, who listed his 1936 home in the sought-after area north of Montana Avenue in Santa Monica. The modern Craftsman was in escrow in 10 days and sold for $2.25 million. The actor bought the house in 2007 for $2,385,000, according to public records. 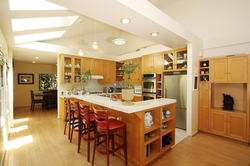 The Craftsman's 2,104 square feet include a kitchen/great room with skylights, a master suite with an office, two additional bedrooms and two bathrooms. The detached garage has been converted to a studio.

Margulies, 43, won a Golden Globe and a Screen Actors Guild Award for her starring role in the legal drama "The Good Wife" (2009-present) and an Emmy for "ER," on which she co-starred from 1994 to 2000 and returned for an episode in the final season in 2009.

The one-story house has 12-foot ceilings, speakers in every room, a high-definition drop-down projector and screen, and fireplaces in the living room, in the master bedroom and on the patio. Four bedrooms are complemented by 3 bathrooms. Outdoor dining and living rooms, a swimming pool, a cabana and parking for six cars complete the third of an acre. The property came on the market in late February.

Designed for entertaining, the house was likely not a fit for new father Watson. He married actress Jennifer Freeman last fall, and they have a baby daughter.

Watson, 30, played at UCLA and was with the Memphis Grizzlies, the Denver Nuggets, the Seattle SuperSonics and the Oklahoma City Thunder before joining the Pacers last July. He bought the house in 2007 for $3,995,000.

Lewis, whose biological parents were actress Loretta Young and actor Clark Gable, has been living close to her roots. Her pied-a-terre is near her mother's original home. The unit also is within walking distance of restaurants and entertainment.

There are two bedrooms and two bathrooms in 1,210 square feet, and views run from downtown L.A. to Century City. The building has a rooftop sun deck with a swimming pool and spa.


Moguls Change it up in Bel-Air

Entrepreneur Matt Coffin, the founder and former president of LowerMyBills.com, has sold a Mediterranean-style mansion in Bel-Air to Chicago businessman Ted Foxman for $16.25 million.

Entered through a two-story foyer, the 14,000-square-foot house has views of the Bel-Air Golf Course, the city and the ocean. There are six fireplaces, a bar, a den, a library, a breakfast area, seven bedrooms and 11 bathrooms. The grounds cover more than three-quarters of an acre.

Coffin sold LowerMyBills, which connects mortgage seekers to lenders, to Experian in 2005 for $330 million. Foxman sold his Eagle Test Systems in November to Teradyne for $360 million and founded the branding and marketing firm Productive People.


A New Owner After 51 Years

Update: The Hollywood Hills home built for actress Beverly Garland has sold for $100,000 more than its $1,765,000 asking price. It was on the market only 11 days before entering escrow.

Constructed in 1959 by Garland's husband, Fillmore Crank, the compound consists of the main house, a detached guesthouse and a detached workshop for a total of four bedrooms and 4 bathrooms in 3,660 square feet. Garland and Crank were the sole owners of the house, where she lived until her death in 2008 at 82.