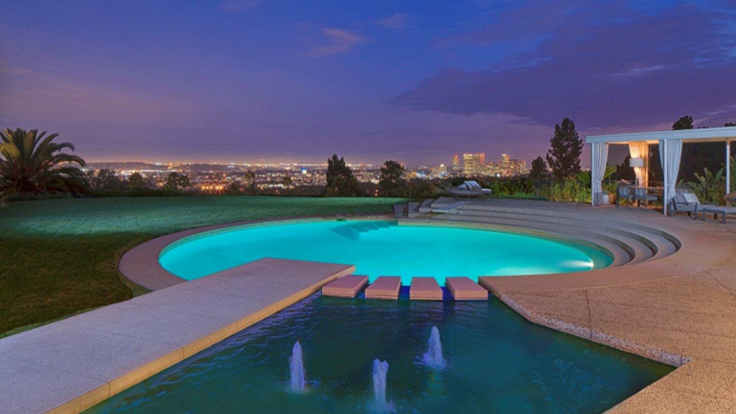 Located in the high-end Trousdale Estates area, the "spectacular trophy architectural property" features designs from renowned architect A. Quincy Jones and was completely restored in 2006, according to the listing.

The one-acre property includes the approximately 5,500-square-foot home with four bedrooms, a staff bedroom and 5.5 bathrooms. It features a bi-level living room, free-standing fireplace, floor-to-ceiling sliding glass doors throughout and a detached office, RealEstalker reports. Outside, the home includes cabanas, a fountain and a circular swimming pool.

The recently divorced couple purchased the "trophy" property in June 2004 for $5.45 million. They reconfigured the bedroom wing, among other alterations, with architect Cory Buckner, according to RealEstalker.

Architect A. Quincy Jones, who died in 1979, is well known in Southern California for his modernist style. Two of his best known projects are the Walter Annenberg estate, "Sunnylands" in Rancho Mirage, and the Mandeville Center for the Arts on the campus of the University of California, San Diego.

Ms. Cox is an actress, producer and director. She is known for her roles on the "Friends" and "Cougar Town" sitcoms as well as her role in the horror movie series "Scream." She owns Coquette Productions which was created with then husband Mr. Arquette, who also starred in the "Scream" series.