The Liverpool home where Beatles legend John Lennon lived during the first years of his life sold for Â£480,000 ($770,250) at an auction yesterday.

The late music icon lived in the red brick Victorian home at 9 Newcastle Road in Wavertree, Liverpool, from his birth in 1940 to 1945.

The three-bedroom home is located close to Penny Lane -- which was an inspiration for one of the Beatles' most iconic tracks. 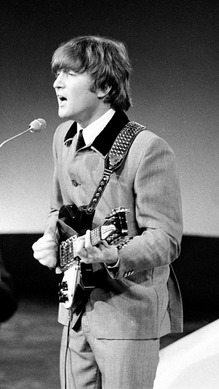 An anonymous American Beatles fan purchased the home, exceeding the guide price, which was set between Â£150,000 and Â£250,000, according to The Guardian.

"It has got a lot of history from when he was a youngster," Andrew Brown, managing director of auctioneer Countrywide Property told ABC News.

The historic home has only changed owners a few times. The current owner says it still resembles the home Lennon grew up in.

"I have made sure original features have been preserved so that they reflect the 1960s period when the Beatles wowed the world with their rock and roll music," the owner said in a statement. "The main structure of the house and the features, such as the original Victorian sliding sash windows, are as they were when John Lennon lived here with his parents and his grandparents from 1940 onwards."

The auction took place three miles from the house at The Cavern Club, a music venue where the Beatles played about 292 times between 1961 and 1963, ABC News reports.

"It's the ultimate pilgrimage for Beatles fans across the world," John Keats, the events director at The Cavern Club said. "It's a fitting place to hold the auction."

Born in Liverpool, the singer and songwriter rose to worldwide fame as a member of the Beatles. After performing with the band from 1960 to 1970, the singer ventured on a solo career, producing iconic songs like "Give Peace a Chance" and "Imagine." Mr. Lennon married Yoko Ono in 1969, who was blamed by many for the group's disbandment. Mr. Lennon was murdered in New York City in 1980.

Other celebrity childhood homes sold recently include that of Taylor Swift and Kurt Cobain.