Actor and producer Mark Wahlberg has sold his Beverly Hills mansion for $12.995 million, after five years of trying to find a buyer. 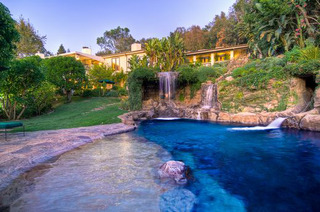 Built in 1985, the Mediterranean-style mansion is set on almost two acres overlooking Benedict Canyon. The five-bedroom, 8.5-bath main house features a screening room, formal dining, and a living room designed for entertaining, according to the listing. The home includes a detached professional two-story gym with a boxing ring -- probably used for training for his 2010 starring role in the "The Fighter."

Outside, the property features a sports court for playing basketball, tennis, or racquetball, a putting green, waterfall pool with a grotto and cabanas.

Mr. Wahlberg purchased the home in 2001 for approximately $5 million. He later spent two years renovating the property before placing it on the market for the higher price, Redfin reports.

Formerly known as Marky Mark, Mr. Wahlberg transitioned into acting and is known for his roles in "Boogie Nights," "Three Kings," "The Departed," "Shooter," "Ted" and "Pain & Gain," among others. He also served as executive producer of the TV series "Entourage," "Boardwalk Empire" and "How to Make It in America."