Waikiki in Honolulu packs a lot into its small, 500-acre landscape.  At just two miles long and half-a-mile wide, there are nearly 300 hotels with over 50,000 rooms to choose from.  And according to the Hawaii Tourism Authority, those rooms keep filling up.  Visitor arrivals and expenditures to the state have increased for the fifth consecutive year, with nearly 9 million visitors spending over $15 billion.

If you like Pina Coladas and getting caught in the rain, this is your place.  If not, it's still where you want to be.  The rain never sticks around, and there are plenty of other drinks; from traditional favorites to exotic and uniquely local.  And while Waikiki Beach is a paradise for beginning surfers, experienced shoppers and those in search of fine dining and out-of-the way eateries, it's those hundreds of hotels that catch the eye. 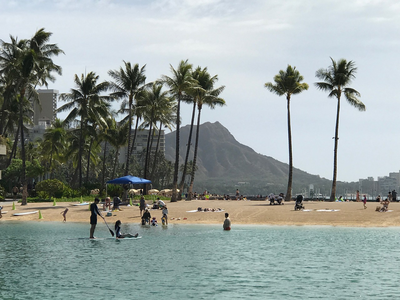 Nestled alongside swaying Palm's, aging Banyan's and twisted Jacaranda's, quaint boutiques and newer luxury hotels compete against the more established resorts.  The Moana Surfrider and Royal Hawaiian, being the two classic crown jewels.  But at the western tip of the beach lies a building steeped in a Honolulu history all its own; the Ilikai, or "Surface of the Sea" in Hawaiian.

The Ilikai, a 30-story building with a distinct three-winged design and turquoise panel railings, has been standing proud for over 50 years.  It was designed by John Graham Jr., who also designed Seattle's Space Needle.  When opened in February 1964, the Ilikai was not only the tallest building on Waikiki, it was the first resort-condo to be developed there, and the largest condominium building in the world.   Today, dwarfed in size by towering hotels and other high-rises, the complex boasts over 1,000 resort-condominiums with a storied past its new neighbors don't have.

President's Johnson, Nixon and Ford stayed here.  As did Elvis Presley, John Wayne, and Jack Benny.  And while other nearby resorts have hosted the famous and well-known, it was Ilikai's weekly presence in the opening credits of the original Hawaii Five-O TV show that gave it its most enduring pop-culture celebrity.  Each week, for 12 seasons, America watched Jack Lord standing on the penthouse balcony, as the camera dramatically zoomed in on him.  A similar sequence is used in CBS's re-make of the show, with Alex O'Loughlin replacing Lord.

Perched above the Waikiki shoreline, Ilikai looms over a private lagoon buffered by the alluring waters of the Pacific. A uniquely "old Hawaiian" harbor-front hotel with all the conveniences of its urban location.  Within walking distance are a variety of experiences.  From the re-imagined historical International Market Place, to the sprawling Ala Moana Mall. 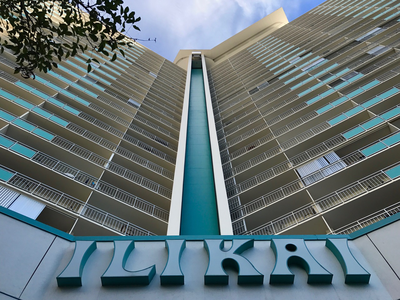 When hungry, you can stay on property and dine at Sarento's, Ilikai's 360-degree fine dining restaurant on the 30th floor.  Or walk next door to Morimotto, Iron Chef Masaharu's upscale Japanese restaurant inside The Modern; one of Waikiki's many sleek, new hotels.  Which, by the way, was once part of the Ilikai.  Just around the corner, hidden in plain sight along the busy Ala Moana Boulevard, sits Goofy Café; a treehouse loft breakfast-lunch-dinner eatery serving healthy and organic island-only ingredients.  Known for its huge acai bowls and smoothies, the café even has a "traceability report" on its menu indicating which local farm its food comes from.  Goofy (named, not for the Disney character, but for the right-foot forward surfing stance) is an easy miss, situated on the top floor of a nondescript novelty shop at street level.  Once inside though, its comfy, low-key, beachy atmosphere is sure to inspire the aloha spirit within.

When you find yourself on the island of Oahu (and you will), enjoy the modern melee of Waikiki.  Just don't forget to look back at the history that propels it.  Ilikai ushered in a new era in Oahu, and with the island's continued tourism boom, she's on the verge of yet another.