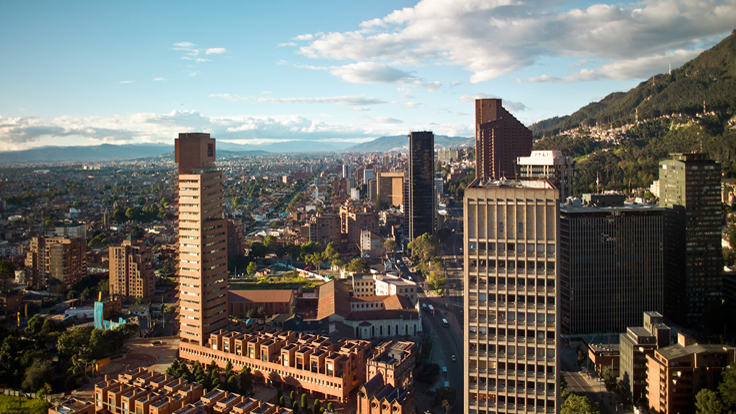 These days any developer, investor, or construction company working in and around Bogotá is sure to have a highly charged opinion about the new zoning law (POT in Spanish for Plan de Ordenamiento Territorial). This plan, passed by mayor Gustavo Petro in 2013 by decree and without the approval of his city council, has become the most polarizing issue in a city full of polarizing issues.

"The idea is to achieve integration through a combination of zoning measures."

The first thing for any outsider to know about why this zoning law was passed in this city at this point in time is that Bogotá, like many of Latin America's largest cities, is extremely segregated. The wealthy sections of the city are dotted with boutique shops, gourmet restaurants, trendy bars and clubs, and sleek new office buildings. By contrast, the vast shantytowns that mushroom out around the edge of the city and up onto the mountains are equipped with minimal public services, tenuous foundations, and poorly-paved roads.

The municipality has taken broad measures over the past 20 years to narrow this gap, to varying degrees of success. Aggressive policing has stifled the growth of crime in poor neighborhoods.  The income stratification system, implemented ubiquitously in Colombia's urban centers, subsidizes utilities of lower-income families - Stratas 1 and 2 - with higher fees for upper-income families - Stratas 5 and 6. Meanwhile new public transport, housing, schools, libraries, parks, and hospitals have fanned out with priority in Bogotá's poorer south. 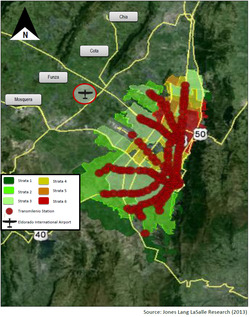 Despite all this, the city's business districts and wealthy classes have been creeping north for decades in a demographic shift similar to the "white flight" phenomenon seen in the United States. Petro's proposed solution is a zoning code that disincentives commercial development in high-income areas and encourages it in lower-income areas, with the goal of better integrating where Bogotanos of different socioeconomic backgrounds live, work, study, and hang out.

The idea is to achieve integration through a combination of zoning measures. One is to limit taller residential and commercial buildings in the wealthier north to main avenues, while developments on secondary streets in wealthy neighborhoods would be capped to three stories. This will have an important impact in areas like Chicó, Chapinero, and Santa Barbara, which are very wealthy and very dense.  Another measure is to offer developers subsidies for building in low-income areas, or for building low-income housing in higher-income areas. Builders are also incentivized to complement their edifices by rolling out more parks and bike lanes.

The plan has drawn heavy skepticism. The construction industry argues that Bogotá is experiencing very high demand for new residential and commercial construction as a consequence of strong economic growth. Given that the city is very dense with few lots available for development, putting further restrictions on development would further limit supply. The most likely outcome, it is argued, is that more builders are competing for a smaller number of developable lots, causing prices to rise across the board. With higher development costs passed on to the consumer, the same poor families who were supposed to win under the plan would be financially squeezed.

The code has also drawn heat from fiscal hawks and anti-sprawl advocates. Their concern is that new developments will be dissuaded from happening inside the city and instead will be pushed out to suburbs like Chia, Cota, Funza, and Mosquera, where mayors are eager to accommodate development and broaden their tax base. If new construction is going to happen anyway, they argue, Petro should take measures to assure it happens within the city limits.

Finally, many simply don't think that this type of integration is needed at all. While Bogotá is socioeconomically segregated, so is nearly every major city in North and South America. And according to several urban poverty indicators such as access to food and public services or crime, the situation in Bogotá is not as dire as other cities like Rio de Janeiro, Lima, Caracas, or even several cities in the United States.

While the debate rages on, developers rushed to get their projects approved before the new zoning code was passed. This is causing an anticipated bump in construction over the next two years as these buildings are rushed to begin construction.

After that, what happens with the city's zoning code is up in the air. With Petro's mandate concluding at the end of 2015, and given his sharp decline in popularity and political polarization, it is possible - if not likely - that his successor repeals the zoning code. However, the uncertainty this would create would likely keep the construction sector in limbo even longer.

Scott Figler lives and works in Bogota, Colombia where he heads up the research division for Jones Lang LaSalle's North Latin America operation. His market reports can be found here. 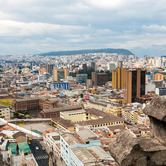 Latin America is the most urbanized region of the world with nearly 80 percent of the population living in urban areas.