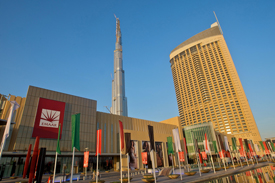 (DUBAI, U.A.E.) -- Children can soon experience their ambition to become anything from pilots to fashion models to doctors or bankers, as the first KidZania edutainment attraction in the Middle East opens in The Dubai Mall in the third quarter of this year. Based on role play, the oldest game of all, KidZania is one of the world's most popular children's entertainment concepts and is readying for opening at the mall shortly.

Essentially a scaled-down city featuring all business and social components of a bustling metropolis, KidZania at The Dubai Mall offers up to 70 roles for children to play ranging from doctors, engineers, teachers, construction workers, artists and mechanics, among others. At KidZania, children have the option of just 'visiting' or 'working' in establishments that are modeled on various professions. The 'employees' are provided costumes reflecting the theme of the role they prefer to play, and will be part of an entertainment zone that has its own currency and economy. The entire concept of KidZania is developed on offering children a real-life business and social environment, and familiarizing them with real-world careers.

KidZania aims at enabling children to develop their abilities and attitudes physically and intellectually, while stimulating creative thinking and social responsibility. This will particularly appeal to educational institutions looking for avenues to further strengthen their students' overall development. The award-winning credentials of the theme centre are a perfect complement to the high standards of education envisaged by schools. KidZania has already won the Best Theme Park Worldwide Award from the Themed Entertainment Association in 2001, the IAAPA Top FECs of the World Award in 2006 and IAAPA Brass Ring Award for Industry Marketing in 2008.

Mr. Mohammed Ali, Region Executive Director, and Emaar International, said: "Retail and leisure are central themes that drive the economy of Dubai, and both the sectors need continuous innovation. KidZania is bringing to Dubai, a powerful and successful leisure attraction, which will further enhance the appeal of The Dubai Mall as a family destination."

Established in 1999, KidZania was an overwhelming success when it first opened in Santa Fe, Mexico City. The entertainment zone attracted over 760,000 visitors in the very first year of trade in Mexico and the impressive visitor turn-out repeated at KidZania franchises in Tokyo and Jakarta. In addition to Dubai, new franchises are planned to open in Seoul, Osaka and Lisbon in 2009.

Mr. Yousif Al Ali, General Manager, The Dubai Mall, said: "KidZania is an entertainment concept that has no parallels in Dubai or the region. For the first time, children will have a city all for their own. They will manage the 'city's' economy and social life by enacting various roles. They will also deal with the special KidZos currency, which they can use for buying and selling products, or even save into their accounts."

He added: "KidZania will be a place where every child's dreams come true, and will enable them to obtain a better understanding of how cities and societies function. The opening of KidZania also reiterates the commitment of The Dubai Mall to offer a distinctive leisure and lifestyle experience. Today's mall visitors are discerning about their choice, and it is important to give them variety. KidZania will be a much-preferred attraction for families."

Sprawling across 80,000 sq ft over two levels in the entertainment zone, which will also feature SEGA Republic and REEL Cinemas, KidZania will feature homes, offices, schools, fire station, race track, radio station, pizzeria, hospitals, bank, ATM machines, theatre and fashion ramps, all scaled down to a smaller, child-friendly size. Kids can then choose a preferred 'role' and be provided with costumes and other accessories for the complete real-life like experience.

Mr. Suresh Bhatia, Chief Executive Officer, Emaar Retail, said: "The overarching philosophy of KidZania - an award-winning concept - is edu-tainment.  For the first time in Dubai, children of all ages will have a unique play environment where fun and interactive learning meet. They can not only participate in fun-filled role-play activities but also hone their talent and skills through the real-life-like learning experiences. KidZania's niche activities also mark the first 'experimental marketing' platform in Dubai, whereby we are partnering with local service providers such as banks, hotels and automobile dealers for a true-to-life experience."

He explained: "Work on KidZania is progressing, and when it opens later this year, it will add to a diverse entertainment roster in The Dubai Mall including the Dubai Aquarium & Underwater Zoo and Dubai Ice Rink. KidZania Dubai is billed to be the city's next biggest family destination that will greatly contribute to the all-round development of children."

KidZania will be managed by a team of trained professionals. The high ratio of staff-to-children and Kid Zearch, a Radio Frequency ID, will keep track of children's activities and whereabouts, reassuring parents who can drop off their kids and pick them up at a later time.

The Dubai Mall, one of the world's largest shopping and entertainment destinations, has a wide spectrum of retail and leisure choices for visitors. Of the 1,200 retail outlets in the mall, more than 800 have opened. The leisure attractions including the Dubai Aquarium & Underwater Zoo, Dubai Ice Rink and The Waterfall are crowd-pullers, while the Gold Souk and Fashion Avenue offer a variety of niche shopping options.