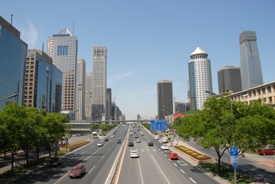 (BEIJING, CHINA) -- While China's real economy has been hit hard by the global crisis, it is still holding up, according to the World Bank's latest China Quarterly Update released yesterday.

The Update, a regular assessment of the Chinese economy, finds that China's banks have been largely unscathed by the international financial turmoil and that the economy still has plenty of space to implement forceful stimulus measures. However, as the global crisis has intensified, China's exports have been hit badly, affecting market-based investment and sentiment, notably in the manufacturing sector.

The Update warns that a 6.5 percent growth rate is significantly lower than potential growth. The resulting spare capacity is therefore likely to lead to weaker market-based investment, less job growth and migration, downward pressure on prices, redirection of exports to the domestic market, and import substitution in the coming years.

However, China is still likely to continue to outgrow most other countries, the Update says. Domestically, amidst the solid macroeconomic fundamentals, stimulus policies help dampen the downturn by providing support for activity and sentiment. Banks are keen to help finance growth, after having deleveraged in recent years. Private consumption has been fairly resilient so far and should be able to continue to grow significantly, while government-influenced investment is accelerating already.

"China is a relative bright spot in an otherwise gloomy global economy," said the World Bank's country director for China, David Dollar. "Shifting China's output from exports to domestic needs helps to provide immediate stimulus while laying the foundation for more sustainable growth in the future."

He said that subdued prospects for the global economy--and thus for exports--increased the importance of boosting domestic demand and domestic consumption, which is also key for rebalancing. Recent initiatives to stimulate consumption and improve people's livelihoods by expanding the government's role and spending on health, education, and social protection measures are welcome and there is room to do more.

The update notes that China's economic fundamentals are strong enough to look beyond 2009. So far, the policy response to the downturn has emphasized stimulating investment to help achieve the short term economic targets. Given the fiscal space, there is a strong case for expansionary policies. But there may be a case for less emphasis on short term growth and more on longer term issues.

"Somewhat lower growth is not likely to jeopardize China's economy or social stability," said Louis Kuijs, the report's main author and senior economist, "especially not if the adverse consequences of the downturn for employment and people's livelihoods can be limited through the social safety net, preferably combined with education and training." Less emphasis on targeting short term GDP growth would allow for more emphasis on the rebalancing and reform agenda and the quality of growth, Kuijs said.

The Update also highlights the importance of financial sector reform. With inflation prospects subdued, there is scope for accommodative monetary policy. Deflation is a risk in principle, but policymakers have some tools to fight it. Further structural reforms in the financial system would help China manage the downturn and make the transition to a rebalanced growth model.