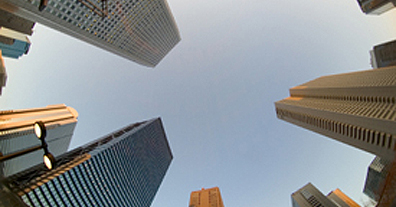 Impact of the Tohoku Earthquake on Tokyo's Office Market

As the world watched on March 11, 2001, a major earthquake and tsunami hit Eastern Japan. According to official statistics, the number of deceased had surpassed 13,000 as of April 15. While major damages occurred in the Tohoku district, the direct damage to Greater Tokyo was limited.

However, disruptions in the supply chain due to damaged production plants in the Tohoku district, as well as electricity shortages following the nuclear plant crisis in Fukushima, have impacted the economy of the entire nation. The damage generated by this major earthquake is expected to surpass that of Hanshin-Awaji Earthquake in 1995.

The earthquake was followed immediately by turmoil in the financial market, as the Nikkei 225 slid and the yen hit a record high against the dollar surging to JPY 76.25 per USD. However, with the coordinated yen intervention by G7 nations, the yen has retreated modestly against the dollar. 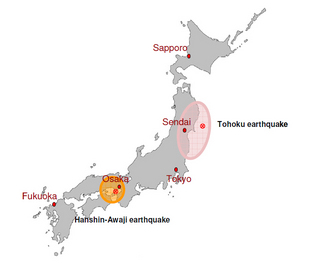 Meanwhile, despite continued volatility the steep downturn was brief and stock market analysts were quick to point out buying opportunities. The Nikkei was, at market close on April 14, 7.5% below its level prior to March 11.

In the meanwhile, the electricity shortages in Greater Tokyo, offline production in Tohoku and lost tourism revenues have directly impacted economic activity. Accordingly, the International Monetary Fund and Global Insight have revised their GDP growth projections for Japan, downwards for FY 2011 and upwards for FY 2012.

The effects of this tragedy are still unfolding and at the time of writing, many of the supply and production disruptions have still not been resolved, nor are the actual damages calculable, let alone the costs of recovery. Nonetheless, there are some fundamental impacts for the Tokyo office market which we explore below.

Movements in the Tokyo office market

JONES LANG LASALLE reports that at the start of 2011, leasing activity had been picking up as companies emerged from the Global Financial Crisis. Businesses could take advantage of the fact that rental values had decreased considerably and were, in fact, past their lowest point and starting to grow. However, following the earthquake, rolling blackouts have dampened economic activities including those that were not directly affected by the earthquake.

Furthermore, the widespread jishuku, or voluntary restraint, has suppressed already stagnant consumption activity, and thus the impact on profit margins and consequently on investment and expansion plans is still fairly uncertain. Under the circumstances, risk adverse tenants will likely lay aside expansion and/or consolidation plans and adopt a wait and see approach, resulting in reduced take-up and additional space on the market. In the midst of uncertainty, even those tenants that are under pressure to relocate or contract space are unlikely to move.

Withdrawal and relocation of multinational companies

As a precaution against earthquakes and as a reflection of the fear of nuclear contamination, enterprises, multinational companies in particular, have been looking at relocating from Tokyo.

JONES LANG LASALLE reports the most favored potential sites are located in Western Japan including Osaka and Fukuoka, in particular Osaka. Although the majority of the tenants have opted for a short-term agreement of under one year, some tenants have decided on a permanent relocation. This will provide some long awaited dynamism for the office market in Osaka, which previously had been facing a particularly large volume of supply scheduled in 2013.

In addition, in terms of business continuity planning (BCP), many companies are considering the option of splitting their headquarters functions between Tokyo and Osaka, potentially reversing a multi-decade trend of consolidating operations in the capital. These developments will weigh negatively on the Tokyo market, both in terms of rental levels and capital values. 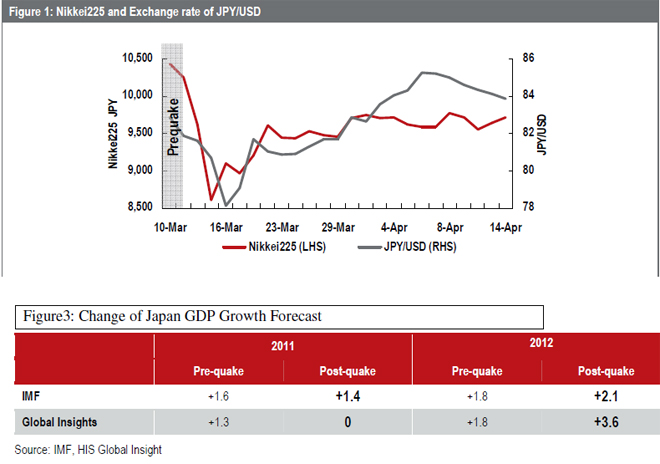 Flight to Safety, Flight to Quality

of the scale-6 buildings will not collapse, ensuring the safety of the people inside. Notably, some tenants are leaving buildings conforming to the current standards in favor of Grade A buildings with better seismic design. 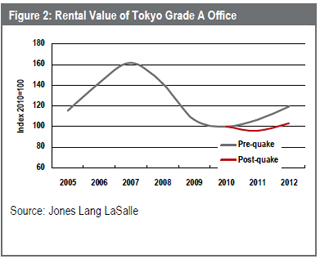 Furthermore, on the back of the electricity supply shortages that have been crippling businesses, demand has increased sharply for buildings with in-house power generation. Nevertheless, due to elevated construction costs such buildings are almost always made-to-order by the tenant and their numbers are limited.

Going forwards we expect a Flight to Safety and a Flight to Quality to be apparent in all corporate location decision making in Tokyo. With a relatively small supply of the latest in seismic design which also boasts in-house power, there are a number of refurbishment opportunities which present themselves to the owner of Grade A or Grade B space that can be upgraded to meet this demand for safety and quality.

Foreign capital investors intend to continue to invest in Japan

The earthquake inevitably has led to a hiatus in the investment market. In some cases this was caused by the cancellation of funding due to the turmoil in financial markets immediately following the earthquake, but in most cases, it was because of the need for a physical damage survey to assess the impacts of the earthquake. Not all but most, foreign investors have expressed positive views towards investment in Japan, and have flagged potential opportunities and their intention to increase their presence in the market.

As to the debt market, foreign lenders have not demanded an increase in the risk premium for Japan in the form of wider JGB spreads. Nor are lenders warning us of any appreciable change in domestic financing conditions, now or over the medium term.

Outlook on the office market in Tokyo

JONES LANG LASALLE says that in the short term, rental values in the Tokyo office market are expected to fall as a result of the slowdown in demand caused by the deterioration in corporate profits following the earthquake, as well as the relocation and withdrawal of multinational companies. 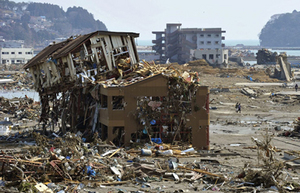 Thereafter, as the economy emerges on the back of demand related to the reconstruction of the Tohoku district, we expect office demand to pick up, and in part supported by affordable rental values, leasing activity in the office market to recover. As to rental values, we expect Grade A office buildings to lead the recovery, with a 3-5% decrease in 2011 and a 5-10% increase in 2012. The recovery of Grade B buildings is expected to lag.

From the investors' perspective, Japan is the third-largest economy in the world with a mature real estate market, and is considered as a primary destination for investment in global asset allocation. Recently, the real estate markets in the Asian countries in particular China have attracted attention as a destination for investment. These opportunities come with a high return based on strong growth projections, but are often high-risk.

Therefore, the diversification of risks is a further contributing factor in favor of the long-term appeal of Japan. However, it is hard to expect the capital value to increase for a short term period as investors are adopting wait and see approach.

While some foreign tenants and investors have reacted nervously to the nuclear power plant crisis, others are observing patiently from abroad. For the moment, the nation embraces jishuku, but for investors and tenants there are differing concerns - from temporarily putting on hold expansion plans and acquisitions to reassessing their locations of business and the quality of their buildings. The realignment of portfolios will be a short-term shock for the Tokyo and Osaka markets, but this is by no means all negative.

The situation in Japan is still evolving and WORLD PROPERTY CHANNEL continue to monitor developments.