According to London-based Knight Frank, price levels of London's prime residential developments are projected to reach over Â£10,000 (approximately USD $13,000) per square foot by 2016.

The research, which sums up the sector over the past decade and looks to its immediate future, analyzing the effect of One Hyde Park, the 86-apartment* Knightsbridge project, on development standards and buyer expectations, sheds new light on the direction the global super-prime development market is forecast to take.

For the first time, actual price performance at One Hyde Park - the world's most expensive residential development - has been released, with a full analysis in the report; this confirms how values grew during the development of the iconic scheme from Â£4,560/sq ft in 2006, to Â£7,500/sq ft in late 2011, in achieved residential sales to date of over Â£1.4 billion (62 apartments sold).

The report also provides an exclusive insight into the 'value added' elements of the development which have helped make it so attractive to purchasers - the link with the Mandarin Oriental brand and the levels of service this delivers; architecture by globally-recognized practice, Rogers Stirk Harbour + Partners; and award-winning interior design by Candy & Candy.

Analysis of the sector suggests there is unlikely to be another residential development quite like One Hyde Park for some time - this is partly because of the lack of finance available for speculative residential schemes, and also because immediately-recognizable 'super-prime' locations like its Sloane Street/Hyde Park site become available only infrequently.

In the last decade, as the resale market was squeezed by increasing demand for a London home from the international newly-wealthy, new-build property began to fill the gap, and become a barometer of the city's appeal to (U)HNWIs from Asia, the Middle East and CIS countries. Hotel-trained concierge teams, living spaces interior-designed using the best marbles, timber and technology, terraces and off-street parking - all these elements became expected in developments and helped drive prices of the best prime central schemes from Â£1,000/sq ft in 2000 to Â£2,000/sq ft in 2004, and up to Â£3,000/sq ft by 2006.

The super-prime development trend is now gathering speed in other centers for the world's wealthy - New York, Monaco, Singapore, and Hong Kong - but only a handful of locations are approaching London's benchmark. 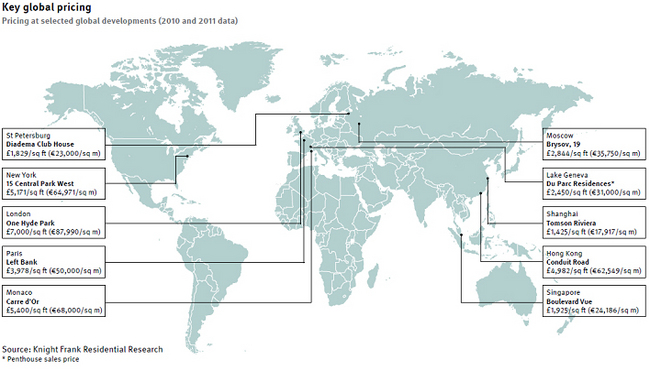 Liam Bailey, Knight Frank Head of Residential Research, comments, "One Hyde Park's success has been due to the fact that it was designed and executed to meet a very specific requirement from the new international wealthy. Not only did these buyers emerge from the recession almost unscathed, but so too in some ways did central London.

"In key markets like London the availability of top-end developments that attract wealthy international purchasers is still very limited. The opportunity for developers to capitalize on this market is therefore a real option.

"The problem is that the sites suitable for these developments are limited, and so too are the skills and knowledge required to deliver the right product. But get this combination right and the rewards can be significant.

"Bearing in mind the Â£1,000/sq ft jump to close to Â£8,000/sq ft in the 10 years to 2011, as well as the recent success of One Hyde Park and other super-prime apartment sales, I suspect this record will be broken even sooner - and that the very best developments will be sold with prices of Â£10,000/sq ft, sometime before 2016." 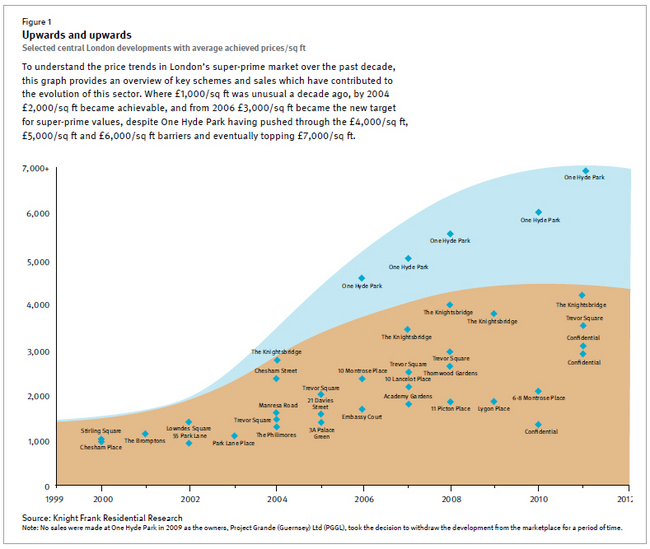