This past week Philippine-based Century Properties announced that it is bringing the Trump brand to the Philippines through the newly announced Trump Tower Manila, a $150 million dollar (USD) mixed used project.

The premier residential building will be developed by Century City Development Corporation, a member of the Century Properties Group, with the brand name and mark under license from the New York-based Trump.

The over 220 unit residential skyscraper will be one of the Philippines' tallest at 250 meters, and will rise at the 3.4-hectare Century City, the flagship mixed-use development of Century Properties in the country's cosmopolitan financial center, Makati City.

In a statement, Donald J. Trump said, "Century Properties Group is a fantastic developer. Trump Tower Manila will be spectacular and there will be nothing like it in the Philippines or beyond. This will be one of the most significant buildings anywhere in Asia."

Century Properties Managing Director and Trump Tower Manila Project Manager Robbie R. Antonio said, "There is never a more opportune time than today to launch Trump Tower Manila, which is perhaps the country's most powerful symbol of progress and readiness to compete on the world stage. This project celebrates achievement, power, modern grandeur, and an unparalleled kind of lifestyle that is on a class of its own."

"One of our company's primary objectives is bringing our brand and the luxury associated with the Trump name into the international arena. The Philippines offers incredible opportunity given the tremendous wealth in the region. This project will set the new standard in the Philippines and beyond," said Executive Vice President of Development and Acquisitions Eric Trump. 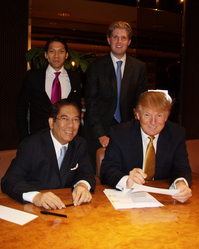 This exciting news comes at the heels of a successful sellout of another internationally-branded Century project, Milano Residences, six months since its official launch in January.  According to the firm's Managing Director and Trump Tower Manila Project Manager, Robbie R. Antonio, the warm reception of the local and regional property markets in 2011 for Milano Residences was a positive indication for developers of first-class residential properties.

This major undertaking, Antonio shared, was conceived out of meetings that started a few years ago in New York City with Ms. Ivanka Trump, Trump's Executive Vice President of Development and Acquisitions.  A friendship developed between the two companies and next came the discussions for a Philippine project.

Ultra-exclusive amenities and features within the building include a grand triple-height lobby, a fine dining restaurant at the ground floor; and a library, business center, lounge and video room on the third level. The tower's 29th and 30th floors will offer spectacular views of Makati while residents enjoy the spa, fitness center and yoga studio, as well as the juice bar, sun deck and lap pool.

With very limited number of units, ranging from Suites of approximately 57 sqm (613 square feet) and 1 to 4-bedrooms and penthouses as spacious as approximately 425 sqm (4,574 square feet), Antonio said that Trump Tower Manila will be offered at very competitive market prices. "We expect that the market will quickly seize each one of these over 220 units--a very rare and limited number for those on the lookout for world-class property the world over."

The project is 100-percent owned and developed by Century Properties.  The Trump Tower Manila showroom is scheduled to open in early 2012 but Century Properties announced that unit reservations have started this month