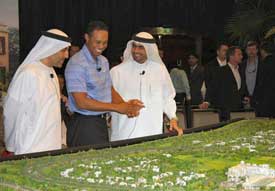 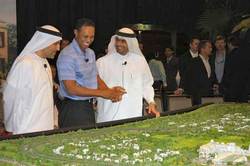 (DUBAI, UAE) -- The big names are feeling the brunt of the financial crisis in Dubai even though some parts of the real estate industry seem to be doing better. This week Donald Trump and Tiger Woods learned that their signature projects were being cancelled.

Back in 2008 the Trump Organization launched the Trump International Hotel & Tower Dubai on Palm Jumeirah with gala events in Los Angeles and New York. Although so far the company has refused to comment, in Dubai the chairman of Nakheel was reported to have said that a shopping center would be built on the site of the $2.9 billion Trump project. Nakheel, the developer of Palm Jumeirah, is floundering as its enormous debt which is part of Dubai World is being restructured. 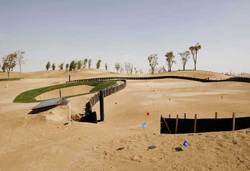 At the time of the launch, Trump International Hotel & Tower Dubai was billed as a 62-storey mixed used building that might have challenged Atlantis which has held the star position on Palm Jumeirah since its flashy launch in November 2008. Work on the Trump hotel stopped in 2009, although Donald Trump was quoted then as saying that construction could restart in 2011. Now it is clear that will not happen this year if ever.

In return for a $10 million design fee, in 2007 Tiger Woods gave his name to an exclusive golf course and villa project from Dubai Properties which is part of Dubai Holding, another of the emirate's government-owned companies that is in serious debt trouble. He was also supposed to receive income from sales of 287 luxury homes listed from $12-23 million.

The golf course was due to open in late 2009. As quoted in Arabian Business, Woods said earlier this week that the project has "been put on hold for right now," and added, "We've got six completed holes and a few that were about to be grassed before construction was halted."

In a statement, Dubai Properties said, "This decision was based on current market conditions that do not support high-end luxury real estate. These conditions will continue to be monitored and a decision will be made in the future when to restart the project."

Tiger Woods will be in Dubai next week to play in the Dubai Desert Classic which starts on February 7. The tournament is part of the European Tour.