(DUBAI, UAE) - The world's largest airport terminal, Dubai's Terminal 3 or T3, is approaching full function today as Emirates Airlines begins routing 60 percent of its arrivals and departures through the new facility. Opened two weeks ago on October 14, Terminal 3 has been phased in gradually, perhaps to avoid the troubles of British Airways with its new Terminal 5.
By December Emirates expects to use Terminal 3 for all its flights, 269 each day. Dubai International Airport processed 34 million passengers last year. In 2008 that number could reach 40 million.

The expansion of Dubai's airport and airline is related to the increasing influx of tourists and business travelers in the Middle East region and greater interest from Americans. Emirates runs two daily nonstop flights to JFK airport in New York, served by both of the airline's new Airbus A380 s and one Boeing 777-300ER. 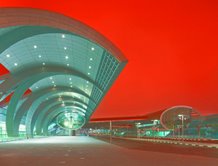 Two days ago, Emirates became the first Middle East carrier to fly to the West Coast when it began three times weekly nonstop service to Los Angeles. It was intended to be a daily service but was reduced as a result of the Boeing strike that has delayed deliveries of aircraft. Service to San Francisco begins December 15.

On the US side, Delta Airlines began nonstop flights from Atlanta last year and United Airlines started service from Washington DC to Dubai two days ago.