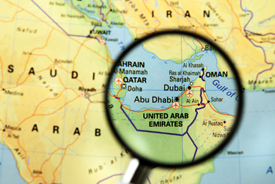 (ABU DHABI, UAE) - When Sex and the City 2 opens around the world Friday, many viewers may be surprised to see that a lot of it takes place in Abu Dhabi, capital of the United Arab Emirates, where Carrie Bradshaw and her friends go on vacation. But the film will not be screened in local theaters, and the Abu Dhabi scenes were not shot here.

All films shown in the country are first submitted to the National Media Council (NMC) for approval. Most major American and British films are shown in the UAE, sometimes with a few scenes cut or shortened. However, distributors may practice self censorship if they suspect that a film would be approved only if massive cuts were made.

Warner Bros, the distributor, said this month that the film would not be shown in the Middle East. However,

it will be shown in Morocco where the Abu Dhabi scenes were filmed. Director Michael Patrick KIng went there after he was refused permission to shoot in Abu Dhabi.

The NMC spokesman called the filming of Abu Dhabi scenes in another location "a deliberate attempt to mislead the audience about where the film was shot, even thought it has been admitted it was filmed on location in Morocco."

Because Abu Dhabi is trying to develop its own film industry, some local filmmakers say they regret the lost opportunity to work with internationally known actors and technical personnel on a major production.  The first Sex and the City earned more than $415 million at box offices worldwide.