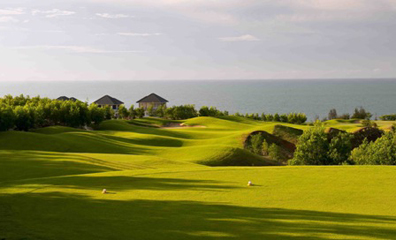 (PHAN THIET, VIETNAM) -- Two of Vietnam's premier courses recently joined forces in a bid to lure more golfers to one of the country's most activity-rich tourist areas.

Ocean Dunes Golf Club in Phan Thiet and Sea Links Golf & Country Club in nearby Mui Ne have formed Golf the Beach: Vietnam's Must-Play Getaway, to better showcase the virtues of this sandy strip along the country's southeastern coast.

"It's about strength in numbers, and that's why Golf the Beach is a very exciting development indeed," said Stephen Banks, general manager at Sea Links. "We've got two excellent championship courses here, with several more in the planning and construction stages, but this is the first time the Mui Ne/Phan Thiet area has been promoted as a golfing destination.

"We think it has major potential. We're so close to Ho Chi Minh City, but a day or two has never done this region justice. Golf the Beach merely states the obvious: Golfers can come and play two of the best courses in Vietnam, each within 15 minutes of the other. At night, in between rounds, they can avail themselves of everything else the region has to offer."

These non-golfing attractions are legion, which is why the Mui Ne/Phan Thiet strip has developed in recent years into a prime draw for both foreign and Vietnamese tourists. Sandy beaches, reliable sun, cooling breezes, and plentiful restaurants, accommodations and nightlife make Mui Ne in particular the country's top beach destination.

To the north lie the famed Red Sands of Mui Ne while, to the south, stretch kilometers of open, quiet roads perfect for extended moped excursions to undeveloped beaches of one's own choosing. At the same time, dependable wind and warm water have turned Mui Ne/Phan Thiet into one of the most popular spots for windsurfing and kite surfing in all of Southeast Asia.

"Or maybe you'd rather take the cable car up Ta Cu and lay down beside the largest recumbent Buddha in Southeast Asia," said Glenn Cassells, director of golf at Ocean Dunes GC. "There's a very relaxed feel about this part of Vietnam, both on and off the golf course. But it's a beach destination at heart, and the vibe reflects that. It's clean, sunny, slow and casual -- especially when you're coming from a place like Ho Chi Minh City, or any big city. It's a place to truly get away."


Golf has long been a stitch in this fabric. The Nick Faldo-designed course at Ocean Dunes has been a linchpin of the Vietnamese golf scene since opening in 1996. Indeed, it was the first modern resort course built in this country, the first to open outside the urban hubs of HCMC and Hanoi.

Sea Links, an attractive and formidable test created by acclaimed course architecture firm Golfplan, joined it in 2008, the product of a golf course development boom that still holds sway up and down the country.

Ocean Dunes is laid out at sea level -- directly beside the East Sea -- and combines elements of firm-and-fast links play, Florida resort golf, and colorful pine barrens. There are several standout holes that weave their way through the track's dunescape, coniferous forest and chain of lakes. However, the uphill 9th - a par-3 played through a funnel of casuarinas pines to a raised green at seaside - is regularly voted among the best short holes in the world.

Sea Links, meanwhile, is more expansive and its dramatic location -- amidst the dunes high above Mui Ne -- offers spectacular long views of the East Sea. The undulating course is challenging; many experts rate it the toughest in the country. It measures 7,617 yards from the back tees, and holes such as the 4th - a treacherous long par-4 - and the signature dogleg 7th are as testing as they are visually pleasing.

"The two courses complement each other by being so very different," confirmed Banks. "One is a flat course, one is hilly. One is more of a traditional design and one is thoroughly modern.

Both are great courses, however, and they are never anything less than exhilarating. Golfers who come to this area for a golf week will almost definitely play both tracks more than once. That's both our calling card and our mission."

"We've got everything in place," Cassells added. "As well as having two championship courses, this area has its own micro-climate so conditions are way better than the rest of Vietnam for much of the year. Cool breezes and sunshine - that's every golfer's dream."