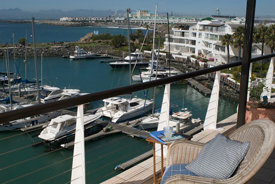 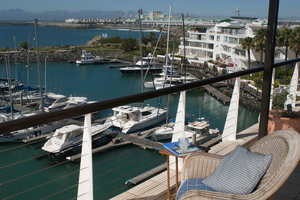 The Water Club Marina is considered to be one of the best marinas internationally. And without doubt one of the cleanest. Apart from the natural tidal movement, it is flushed every 16 hours creating the optimum environment for marine creatures. So much so, that it is the sole source of fresh crustaceans for some rather fussy little eaters. The seahorse will turn up its comical nose at anything vaguely contaminated, which is why The Two Ocean's Aquarium staff can be seen picking delicacies for them daily from the Water Club Marina..

Marina living has become one of the most desirable and aspirational lifestyles globally making it indisputably a blue chip investment. The Water Club in Granger Bay, with its private marina, is one of the world's most beautifully situated waterfront developments in the world (apart from the cleanest) - combining exclusivity, status and privacy with the rewards of waterfront living. Buyers who invested in the development initially have not only enjoyed a unique lifestyle but solid capital growth and return on investment. 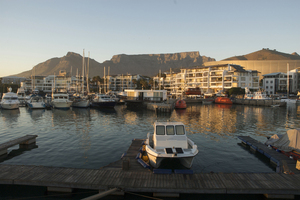 The Water Club is a perfect sheltered cove for a marina. It is not surprising that in 1652, Jan Van Riebeeck chose this exact spot, in the stretch which was to become Granger Bay, to put down his roots. Traces of the pier or mole (French Mouille) that he started building, and which was finally finished in 1781, can still be seen. The Water Club was built after extensive historical assessment and the preservation of landmarks on land that is steeped in history.

The penthouse in the middle of The Water Club has direct lift access and has sweeping views of the Atlantic Ocean, the private marina and the Atlantic Ocean. Audrey Matthews, director of Ronnie Matthews Estates, says, "the apartments have outperformed other sectional titles despite the dip in the market in 2008- 2009." From an initial cost of around $863 per square meter in 1995, the property jumped to $4,313 per square meter in 2007.

Since 2007, there has been a phenomenal growth in values and the completed sales in 2010 have topped $12,221 per square meter, according to Matthews, with no signs of slowing down in the short and medium term. 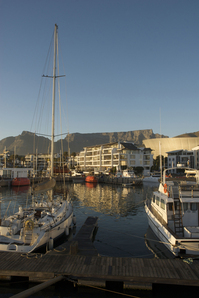 One of the reasons for its growth is the added value of the 'boutique' marina, which is completely private and includes a smorgasbord of recreational boats - catamarans, yachts, sailing boats and power boats ranging in size from 26 feet to the maximum of 70 feet. According to Faried Sylvester who has been the Marine Manager at The Water Club for 14 years, it is really well protected by the natural curve of the shoreline as well as by the main two meter high breakwater made of dolosses which is 70 metres long, a secondary one inside of it as well as a wave attenuator which breaks up the swell as it comes in.

So much so," he says, "that residents are able to go out on skis and canoes and when the South Easter is blowing. You can leave the marina and go all the way to Clifton without encountering any wind."

Not only is mooring space at a premium but the privacy, protection and seclusion of the marina is a unique selling point for the Water Club. Moorings are only available to apartment owners and this exclusivity and rules of the marina are fiercely protected by the berth holders to keep the noise levels down and maintain the serenity of the area for the residents. Boat owners are not permitted to stay overnight on board vessels in the marina and there is 24 hour a day surveillance as well as being floodlit at night. The marina is surrounded by beautifully landscaped gardens creating a sense of space

"One of the reasons The Water Club is so sought after," says Matthews, "is the fact that the developers didn't maximize the number of apartments they could build on the available space as they do these days. The result is that the communal gardens are extensive and combined with the fact that they are tended by a horticulturist and a group of gardeners daily, which makes them a feature of The Water Club."

The absolute quiet of the Water Club belies the fact that it is close to all amenities, recreational activities, hotels and shopping areas. Such is the feeling of being in a sanctuary that ten pairs of Oystercatchers now call this place home.

Says Faried: "They have chosen to settle here where it is protected from the wind and they are left in peace while having an ample supply of food from the Marina - they in fact live more on a diet of limpets and mussels than oysters. We are very proud of our chicks. The birds only lay one egg at a time so their offspring are very precious."

From their home above the Marina club house, the Oysters Catchers, just like the residents of the Marina have a bird's eye view of the private marina and three jetties, whales undulating in the ocean behind the marina, dolphins moving past on their quest for food, snoek boats launching from the Oceana Power Boat Club and returning laden with fresh fish and uninterrupted views of Robben Island. From the comfort of your patio you can watch the start of international yacht races or the golfers at the exclusive Metropolitan Golf Club from the rear patio all within the warm embrace of magnificent Table Mountain, one of the finalists for the Seven Wonders of the World, which stands protectively behind the Mother City.