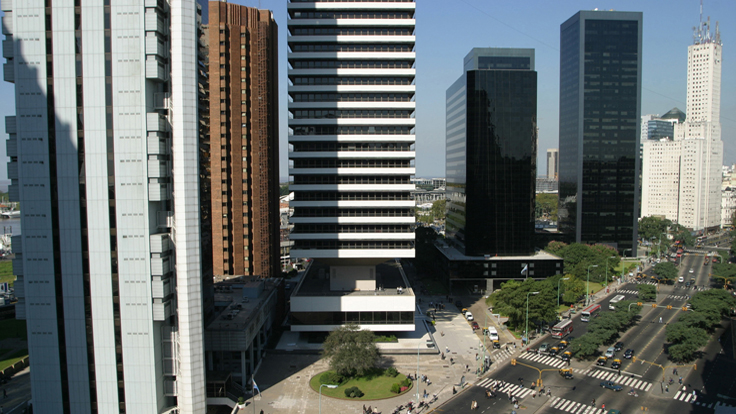 
The supply of new office buildings completed in Buenos Aires during the first six months of 2013 was five times higher than the amount delivered in the same period of 2012, reaching production levels not seen since the market's peak in 2010.

Approximately 56,000 square meters of new corporate space were delivered by midyear compared to about 11,000 square meters last year, according to a report from Jones Lang LaSalle. The record amount of supply includes projects which had been delayed and were completed in the first half of the year, the firm notes.

"In general terms, the market remains stable and robust compared to the last two years," JLL says in the report. "This semester has record production figures since the peak of 2010, despite the delivery dates of several buildings had been postponed."

All the completion were in the Zona Norte section of the city, which JLL characterizes as the "most dynamic, fastest growing district in Buenos Aires."

The office supply in the Argentina capital is divided into two tiers. The first represents buildings developed by the usual office property investors -- companies that focus on corporate demand. The other tier is composed of new, smaller investors arriving mostly from the residential market that often fail to meet corporate expectations, JLL reports.

"Demand has been the leading metric of Buenos Aires of the past years...in 2010, absorption hit the 10-year historical maximum, after four years of continued expansion," the report states.

Demand for office space has been on a rollercoaster. In 2011 demand reached 100,000 square meters, higher than its historical average. However, a 70 percent drop in demand followed in 2012.

Despite the new supply, vacancy rates appear to have stabilized in the city, JLL concludes. The average vacancy rate of Class A and AB office space was 6.6 percent during the first six months, increasing by 1.5 percent from last year after dropping for two years.

In the next six months, approximately 20,000 square meters of new supply are expected to enter the Buenos Aires market.

"On the other hand, the Central Business District (CBD) is expected to be reactivated between 2014 and 2015 thanks to the incorporation of three sizable Class A projects," the firm reports.