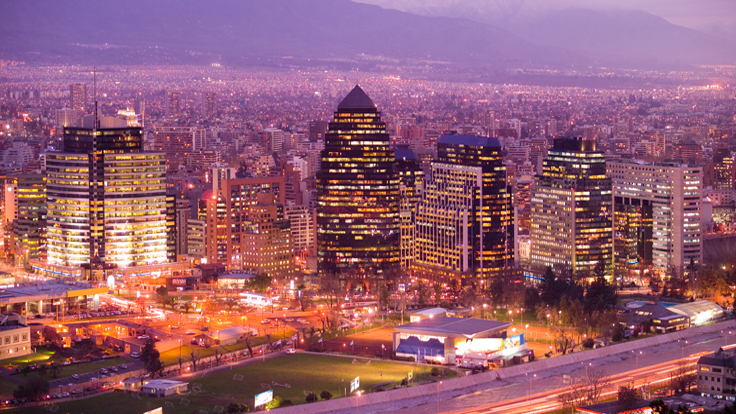 
Vacancy rates in Chile's tight office market reached the highest level in nine years in the first half of 2013.

The amount of empty office space increased from 3.7 percent at year-end 2012 to 4.1 percent in June, according to a Jones Lang LaSalle report. The market reports a historical higher demand for Class A spaces, where vacancy stands at 3.4 percent, compared to 4.7 percent vacancy for Class AB space at midyear.

The country's vacancy rate is considerably lower than other countries in the region, with Panama posting the highest vacancy rate in Latin America at 29.8 percent.

Total office space production for the first six months in Chile was approximately 67,000 square meters, similar to production during the same period last year. However, the firm notes some projects -- including Parque Titanium II, Nueva Apoquindo I and III, and Plaza Manquehu -- suffered delays and are expected to be delivered during the second half along with scheduled supply.

"This stock is lower than 2012's year-end report, due to the downgrade to Class C of some buildings based on deterioration and floor subdivisions," the report states. Class C buildings are not considered as corporate-standard stock.

Additional Class A space, totaling 37,000 square meters, came from two buildings in the Las Condes submarket -- Patio Foster and Cerro el Plomo 6000, each with a substantial percentage of space pre-leased. The other 30,000 square meters consisted of five Class AB buildings delivered through Las Condes, Providencia and Santiago Centro, as well as two buildings located in the Huechuraba submarket, JLL reports.

Absorption totaled 59,000 square meters during the first six months, mostly in pre-leased Class A office space and leases in buildings delivered during the last two quarters in 2012.

The report also highlighted activity in capital markets, driven by a high demand by foreign and local investors and funds looking to purchase corporate-standard office space. Approximately 27,000 square meters of Class A buildings were purchased for almost $135 million. Transactions worth $80 million accounted for more than 22,000 square meters of Class AB office space.

The additional supply could move the city of Santiago to a tenant's market in the next six months, possibly affecting rental rates.

"The forecasted annual supply would be the highest ever recorded for the Santiago office market, with an expected upwards impact in vacancy, which could rise close to 7 percent at year-end, the highest in 10 years," JLL reports.