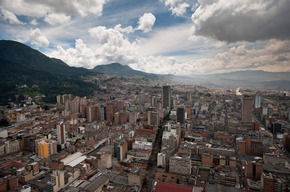 Driven primarily by new apartment construction, the Colombia residential real estate sector continues to expand.   According to a report prepared by Colombia's National Administrative Department of Statistics, there were 19,021,270 square meters under development as at the end of the second quarter of 2012, a slight 2 percent increase over the first quarter.

The 2 percent national level development expansion rate masks significant growth rate differences across Colombia.   With respect to the largest cities in Colombia, the growth rates in Barranquilla, Cali and Medellin were 15.4 percent, 14.1 percent and 3.3 percent, respectively.  In Colombia's largest city, Bogotá, which has over 7 million square meters under development, growth dropped 1 percent.  One factor that has contributed to slowing growth, particularly in the larger urban areas, is land shortages.

While the aggregate growth figures are sluggish, it is too early to conclude that that the residential sector growth cycle is entering a phase of deceleration.   The Colombia government has committed to deliver 1,000,000 affordable homes which, depending on how quickly they are built, will significantly increase supply.  Thus far, construction on approximately 320,000 affordable homes has reportedly started.

The government has also committed to an additional plan to provide 100,000 free affordable housing homes which will also drive development activity.  After a process of selecting the construction companies, construction of these homes is expected to commence next November.  One significant barrier, however, to the delivery of affordable homes in some areas is the need to further develop housing-related infrastructure, such as water connections.

One factor that will impact residential expansion numbers is the future of projects that are currently stalled.  It was reported that, at the end of the second quarter, works in connection with approximately 2.5 million square meters of residential space are currently in abeyance.   If construction on a reasonable portion of these projects resumes, it will add noticeably to development volumes.

Looking forward, forecasting new development activity is challenging due to uncertainties regarding demand levels.   Real estate prices have increased rapidly and, as at the end of the second quarter, new apartment prices increased over 11 percent year on year.   Prices in Bucaramanga and Barranquilla increased over 18 percent and 14 percent, respectively.

One initiative that could improve demand is the Second Home Law, which is designed to provide tax and duty incentives to both Colombians and foreigners living outside of Colombia to purchase second homes in Colombia.