According to global property advisor CBRE Group, Middle Eastern investors are expected to spend over $180 billion in commercial real estate markets outside of their own region over the next decade.

The major increase in flows of Middle Eastern capital into global markets is emerging from the extraordinary mismatch between the lack of institutional real estate in domestic markets and the huge spending power concentrated in the region. Europe is the preferred target with 80% of the $180 billion (around $145 billion) targeted for the region over the next 10 years. Close to $85 billion will flow into the U.K., with $60 billion directed at continental Europe. France, Germany, Italy and Spain are among the key target markets.

Global real estate markets have seen significant inflow of Middle Eastern capital with $45 billion invested between 2007 and the end of 2013 - seven times the reported activity in its home market. With $20 billion invested outside their home region in commercial property in the last two years alone - there is strong evidence that Middle Eastern players are increasing their interest and investment allocations to direct real estate. 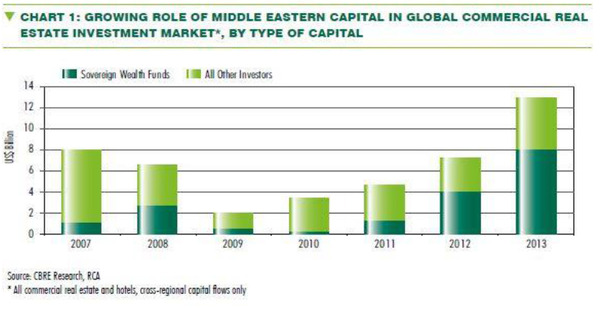 Middle East Sovereign Wealth Funds (SWFs) are now among the world's largest and most influential sources of capital, accounting for 35% of SWFs Assets Under Management (AUM) globally. When compared to Western and Asian SWFs, these funds currently allocate the smallest share (9% of total portfolio) to alternative assets. A further increase in allocation by Middle East SWFs, even by a small fraction, represents an extremely large amount of capital that would have a significant impact on the global commercial real estate market.

The average target allocation to real estate by global SWFs is 7.9%. Applying this to the $2.2 trillion in AUM held by Middle Eastern SWFs gives a total close to $175 billion. CBRE has explored a range of scenarios, including faster and slower growth of AUM by SWFs; a conservative estimate puts investment in global real estate by Middle Eastern SWFs at $130-140 billion over the next decade. Taking this figure with the expected spending of private Middle Eastern investors, as well as property companies and developers, equates to around $180 billion that will flow cross-border and into global markets over the next ten years.

"Since the Global Financial Crisis, SWFs from the Middle East have become one of the most significant sources of capital in the global real estate landscape. The demand from these institutions has evolved during the last few years into a sophisticated source of liquidity for many of the mature real estate markets around the world. This trend is set to continue and with new sources of Middle Eastern capital, particularly from Saudi, set to enter the market over the next couple of years, the importance of this region on the global investment stage cannot be understated."

Close to 90% of all Middle Eastern commercial real estate investment outside of the home region in 2013 was in Europe. This is in sharp contrast to Asian capital that has become increasingly diverse geographically in the last 18 months. While there will be an increase in allocations towards the Americas and Asia Pacific regions, the majority (80%) of direct Middle Eastern investment will target Europe as it offers diversification, cultural acceptance, high liquidity and market transparency.

Around $85 billion of the total allocation will be invested in the U.K., with continental Europe expected to receive $60 billion - almost five times the level of direct investment by Middle Eastern investors in the previous decade. Germany and Italy are key targets with Spain, particularly the hotel sector, now a strategic destination. France has developed close ties with Middle Eastern investors in recent years and offers a vast choice of trophy assets, so will continue to attract strong demand for core product and sectors.

Jonathan Hull, Managing Director of EMEA Capital Markets for CBRE also commented, "The vast majority of Middle Eastern investors are long-term players looking for wealth preservation and strong high income-producing assets, rather than opportunistic investors playing the cycle for short-term gains. This strategy favors prime buildings in core markets and often very large lot sizes. Offices feature heavily in their acquisitions, while in the last couple of years there has been greater interest shown in retail, as illustrated by a string of high street acquisitions in London and Paris, as well as provincial cities in the U.K. and France. Interest in hotels is also noticeable and extends from a historic interest in the hospitality sector in home markets." 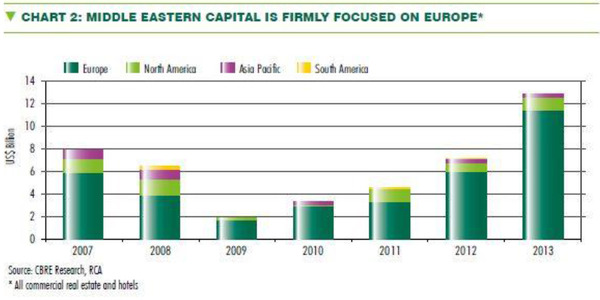 While some increase in interest towards the Americas is expected, the need for Middle East investors to diversify away from U.S. dollar-dominated investments will counteract the fundamental attractiveness of real estate as an asset choice. CBRE estimates that about 10% of the capital (around $18 billion) will flow into the region. This represents an average annual investment of around $1.8 billion, notably above the $1.2 billion invested in 2013, which in itself was relatively high by recent standards.

The diversification benefits that the Asia Pacific region offers could lead to a change in strategy for Middle Eastern investors. The number of deals completed in the region has been on the increase, but how quickly that interest will crystalize into a more robust pace of acquisitions, rather than a small number of large asset deals, remains to be seen. CBRE expects that the remaining 10% of the $180 billion will be intended for allocation towards Asia Pacific.