Cluttons has just released its Muscat Spring 2014 Commercial Market Outlook report, which reveals that the supply and demand equilibrium for Grade A space is now nearing a tipping point, with the delivery of new stock starting to fall behind the level of demand. As a result, Cluttons forecast that Grade A office rents are likely to drift upwards during 2014.

According to Philip Paul, Head of Cluttons Oman, "At Beach One in Shatti Al Qurm, for instance, we have achieved 80% occupancy since the building was brought to market two years ago, highlighting the depth of demand for Grade A office space. We have experienced a similarly quick pace of lettings for offices at Saud Bahwan Plaza in Al Ghubrah." 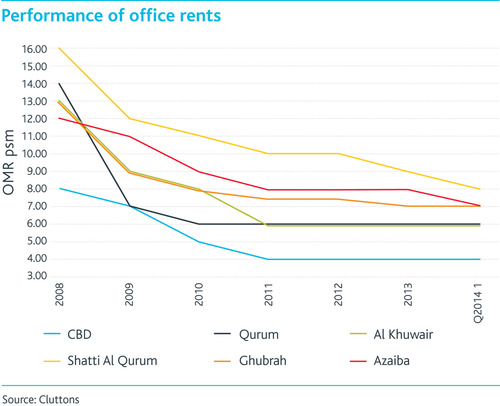 Given the significant investments being made by the government to also upgrade the Sultanate's port facilities, the report points to an expected increase in the demand for warehouse and industrial space this year.

With the relocation of the freight container terminal from its existing location in Port Sultan Qaboos in Muscat along the coast to Sohar, planned for later this year, it is anticipated that the latter will emerge as an activity hotspot. Cluttons anticipates that occupiers will rush to reposition themselves around the new port and this will help to remove some of the freight traffic from Muscat's already congested road network.

In the hotel sector, a substantial supply pipeline of four and five star hotel rooms are expected in the next five years. Although, there is a need for these luxury rooms in Muscat, there is also a strong danger of oversupply, which may translate into increased downward pressure on room rates.

Paul adds, "Given the expected oversupply of luxury high end hotels, we see a significant opportunity for mid-range three and four star hotels to expand in Oman and this will present new development opportunities as the sector continues to mature. We believe that a diverse range of hotel offerings will add further impetus to Oman's already growing reputation as a holiday destination."

A number of large scale mall developments are currently underway with the current estimated supply of approximately 350,000 sqm of leasable space within shopping malls set to expand by a further 35% over the next two years. Cluttons latest report indicates that the ability of the market to absorb the flurry of new malls due for delivery will certainly put retail rents under strain.

Paul concludes, "We expect to see developers increasingly focused on the creation of smaller neighbourhood malls with leasable areas in the region of 3,000 to 10,000 sqm aimed at servicing the retail needs of the surrounding population. The first of these neighbourhood malls, Al Marsa Village, is set to open later this year at The Wave, with several more likely to follow."