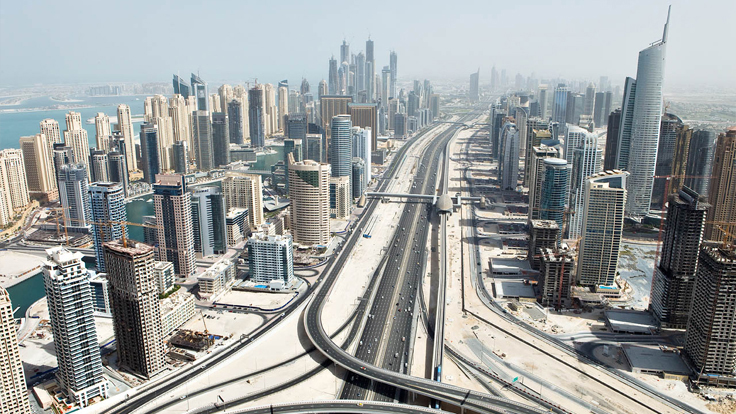 
Dubai's prime residential property is forecast to record the world's highest growth in prices in 2014, according to Knight Frank's global forecast.

Even though capital values remain below the bottom of the market in 2009, the rapid increases are causing concern for many.

As a result, the emirate has witnessed measures aimed at easing residential price growth including a doubling in the transfer fee, mortgage caps for both expatriates and nationals and the state-owned developer Emaar's ban of real estate agents from selling off-plan property before completion.

"Home buyers have been showing signs of taking a "wait-and-see" approach - not surprising in view of the new cooling measures and the fact that prices are quickly approaching previous highs," Knight Frank said in the report.

These measures should slow the quarterly rate of increase in Dubai transaction volumes at the end of the year, but price growth is forecast to quicken again in the beginning of 2014, Knight Frank reports.

Winning the bid to the 2020 Expo is expected to further boost the emirate. The greatest opportunity in Dubai's luxury property market will be found by those searching for regional safe haven, according to the report.

The greatest risk for Dubai's prime property market is the Eurozone debt crisis, followed by geopolitical tensions and the end of quantitive easing in the U.S., according to the report.

Globally, however, the Eurozone debt crisis is not considered the overriding concern that it was a year ago.

"Instead, rising interest rates and government intervention in the form of buyer restrictions now pose the greatest threat to luxury residential markets worldwide," Liam Bailey, global head of residential research, Knight Frank, said in the report. "Opportunities in 2014 are focussed more on a local rather than a macro level. An improving local economy as well as the search for regional safe havens are considered the best means of boosting investment and driving inward capital flows."

The property markets of Beijing, Shanghai, Sydney and Paris round out the top five for Knight Frank's global forecast for annual prime price growth in 2014.

Hong Kong is forecast to record the largest price decline in 2014, dropping five to 10 percent. In an effort to cool the property, Hong Kong's government has introduced various measures including increased levels of stamp duty for non-residents looking to purchase property.

In October, Barclays analysts Paul Louie and Zita Qin wrote in a report that home prices in Hong Kong could fall as much as 30 percent by the end of 2015.

"The Hong Kong property market is about to enter its first real downturn since 1998," they said.

A common response to the financial downturn has been witnessed by global residential markets, analysts say.