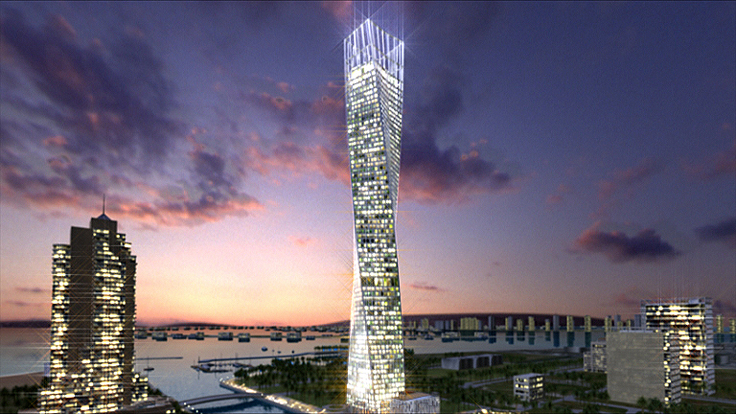 
Once a symbol of Dubai's stalled development market, the project billed as "the world's tallest twisting tower" has finally completed in Dubai.

Saudi Arabia-based developer Cayan Investment and Development today formally inaugurated the 75-story tower, which spirals 90 degrees from base to tip.

The $1 billion project is a couple of miles from the 828-meter Burj Khalifa, the tallest building in the world.

The Infinity was designed by Skidmore, Owings and Merrill, the firm responsible for the Burj Khalifa, the Trump Tower in Chicago and the Jin Mao in Shanghai.

The tower's distinctive twist offers residents a view of either the Palm Jumeirah or Dubai Marina. But it also presented a construction challenge.

"It's seriously difficult, because the twisting creates torsion," Magdy Ibrahim, an assistant professor of architecture at Abu Dhabi University, told The National. "The beams and the columns are trying to rotate out of that position, because of the eccentricity of the loads. This requires a very careful and intricate structural design."

Apartments in the tower are priced between Dh2 million ($544,500) for a one bedroom to as much as Dh3.5 million for a two bedroom.

Construction on the project stalled in 2010, but was renewed last year. This video illustrates the construction process.