International real estate consulting firm Cluttons reports there is an increased demand in both the residential sales and lettings markets across Muscat that is being underpinned by an increased level of job creation, with both buyers and tenants focusing their attention on higher quality schemes.

According to the Cluttons' Muscat Spring 2014 Residential Market Outlook Report, tenant demand has improved in line with increased job creation. This has been in part driven by the government's heavy investment in transportation and energy infrastructure upgrades. 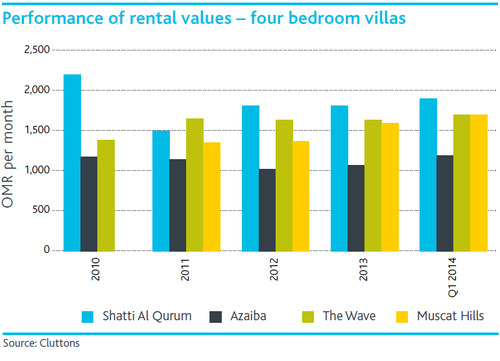 In the rental market, where attention is centered on schemes perceived to offer better quality accommodation, two-bedroom apartments and four-bedroom villas remain the most sought after across Muscat. In addition, strong demand for larger villas in particular, coupled with limited new supply, has helped to drive up rents during Q1 2014. Monthly rents for four-bedroom villas have risen across most submarkets, with Azaiba (9%) showing the strongest growth this quarter. On the other hand, rents for two bedroom apartments have remained largely stable over the same period.

According to Philip Paul, Head of Cluttons, Oman; "With an increased emphasis on quality, The Wave and Muscat Hills are two developments that are currently enjoying a resurgence in demand, with The Wave recently bringing forward the release of its Reehan Residences to satisfy investor appetite. At the same time, the rising levels of inventory here will help to address some of the pent up tenant demand for The Wave."

The increased interest in higher quality properties is set to lead to a widening gap between prime and secondary locations throughout the city in the near term. 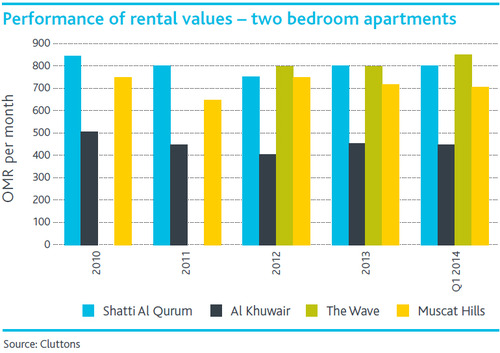 The report asserts that the sales market is showing a significant increase in demand for completed residential properties. At The Wave and Muscat Hills, which are Integrated Tourism Complexes (ITC), prices average OMR 1,000 psm. Some Omani investors are being attracted to the ITC properties due to the attractive rental yields, while others are driven by the desire to transition to home ownership.

A degree of pent up demand from Omani nationals, which is being driven by a gradual build-up of home ownership aspirations since the 'great' recession, has resulted in many households now opting to step on to the property ladder, buoyed by rising market confidence levels.

Paul comments, "On the supply front, we feel the market has room to absorb further residential schemes and prices are, to a large extent, currently being supported by the dearth of stock. With no substantive new ITC schemes likely to be delivered over the next six months, we expect capital values to continue edging upwards over the course of the year. That said, developers are mobilizing on sites such as Saraya as they move to capitalize on the strengthening appetite to purchase"

According to the report, foreign investment in to Oman's residential property market has also risen in the past year, in particular from UAE-based non-resident Indian (NRI) buyers. With Oman's long and close history to the Indian subcontinent, NRI buyers are increasingly attracted to Omani cities such as Muscat, which offers excellent air and road links to nearby Dubai. In addition, there is the added benefit of a residential visa linked to property ownership. This is something other regional locations are unable to offer, or guarantee.

Steve Morgan, CEO Cluttons Middle East concludes, "We have recorded an upturn in the number of non-resident Indian buyers from the United Arab Emirates entering the market over the past six months. With prices rebounding in Dubai, an affordability threshold may have been breached and with regulations surrounding retirement properties not entirely clear, it would logical sense for this group to look at nearby markets such as Muscat. While this trend is yet to remove substantive quantities of stock from the market, the propensity for the creation of several "buy-to-leave" homes, as the limited supply is further depleted, will no doubt place further upward pressure on capital values."