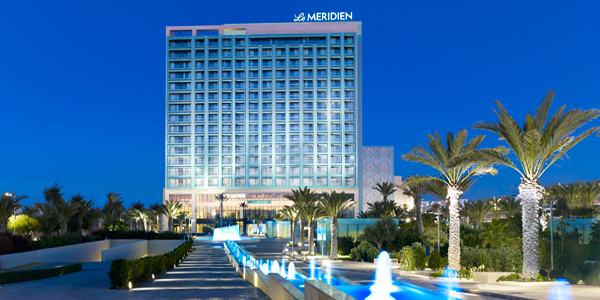 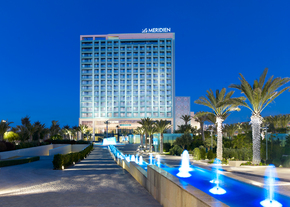 Owned by Sonatrach, the new le Meridien Oran Hotel is part of a mixed-use development, which includes an adjacent conference and exhibition center, an esplanade and an oceanfront promenade. Located on Algeria's northwestern Mediterranean coast, Le Meridien Oran sits on a cliff offering breathtaking views of the Mediterranean.

Le Meridien Oran also features an all-day dining restaurant with an open kitchen, a chic lounge bar with inspiring sea views, the city's first authentic Italian restaurant as well as a lobby bar serving Illy coffee and tea from around the world.

Le Meridien Oran Hotel & Convention Centre houses the largest meeting facilities in North Africa with nearly 9,000 square meters of flexible meeting and event space, including two ballrooms, a pre-function area and 23 meeting rooms. Equipped with state-of-the-art technology the convention center houses an auditorium that can seat up to 3,000 seated guests and features the largest mural fresco in the world. Created by Algerian artist Tewfik Boumedhi, the 2000-meter-long facade is made of 51,000 tiles and depicts the Southern Mediterranean culture in Arab-Moresque art.

"Le Meridien has long had a presence in Africa, and the opening of Le Meridien Oran is a key milestone as we celebrate the brand's strongest portfolio and performance levels in its history," said Vincent Gillet, Global Brand Leader, Le Meridien and W Hotels Worldwide. "Since being acquired by Starwood more than six years ago, Le Meridien has undergone a comprehensive brand re-launch, and we are proud that Le Meridien Oran showcases many elements of the new Le Meridien brand direction."

Le Meridien, the Paris-born hotel brand currently represented by 100 properties in 50 countries, was acquired by Starwood Hotels in November 2005. With close to 80 of its properties located in Europe, Africa, the Middle East, and Asia-Pacific,  Le Meridien provided a strong international complement to Starwood's mostly North American-centric holdings at the time of purchase.

Since then, Le Meridien has gone through a brand re-launch, which included a large-scale hotels product consolidation as well as redefining its brand strategy.

Plans call for dynamic expansion of Le Meridien Hotels and Resorts within the next five years, concentrating in the U.S., Latin America, and Asia-Pacific markets, including destinations such as India, Thailand and China.