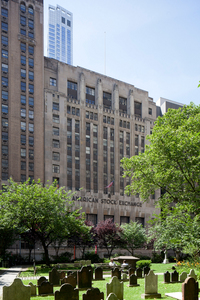 According to RCA's website, Michael Steinhardt and Allan Fried, the sellers, purchased 86 Trinity Place for $17 million and the 22 Thames Street building for $48 million in February 2011.

"What is interesting about the properties is that the sellers bought them for half price less than two years ago," says Dan Fasulo, managing director at Real Capital Analytics. The former American Stock Exchange building, a landmark building, is located near the World Trade Center property, he says.

Although the Fisher Brothers declined to talk to the press on Tuesday, according to an article in The Real Deal, Steinhardt and Fried said, in published reports in June, that they intended to build a 174-unit hotel with 100,000-square feet of retail at the 15-story stock exchange building. Furthermore, in July, they said that they wanted to build a 300,000-square foot residential building at 22 Thames Street.

The Fisher Brothers firm has been a developer and building owner in New York since the 1950s. The company owns such Class A office buildings as the Park Avenue Plaza, 1345 Avenue of the Americas and 299 Park Avenue. It is also a residential developer, having built 50 Sutton Place South and Imperial House at 150 East 69th Street a number of years ago. More recently, it built an Upper East Side condominium called Chartwell House.