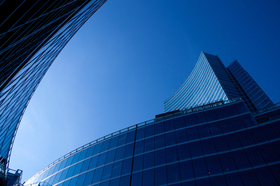 "The way I'd characterize the office market recovery is 'slow and steady,'" says Arthur Jones, senior managing economist at CBRE Econometric Advisors in Boston.  "The level of office-using employment is only 2.4% below the pre-recession peak in 2008," he says.

"Although I wouldn't describe what we are seeing today as an acceleration in the office market, that will happen next year," says Jones. At that point, there will be improvement in fundamentals, such as rent growth and demand for office space, he says.

Among the office markets that Jones says have recovered, or are in the process of recovering, New York is high on the list, says Jones. Hurricane Sandy will only be a temporary set-back for New York, he says. "Most of the office buildings (that were damaged) will be back up and running in a quarter's time and many have come back already," says Jones.

In New York, Jones says he expects to see occupancy improvements, because office payrolls are back to pre-recession levels. The vacancy rate there is 8.7% currently and in a year, it is expected to be at 8.2%, which is low, he says, "so you will see significant rent inflation there."

The other places where there is real potential for growth, says Jones, are San Francisco, San Jose, Minneapolis, Pittsburgh and Denver, all of which have high concentrations of high-tech companies. Also, Pittsburgh has ties to natural gas exploration, as does Houston, he says. The energy industry fuels the economy and is a boon to the office market in these metros, says Jones.

Atlanta is recovering, but has a long way to go because of its housing crisis, says Jones. "In terms of fundamentals, (the metro's commercial real estate market) is still three or four years away from recovery," he says. The vacancy rate in the office market in Atlanta is still above 19%, says Jones. "For that market to do well, it should be in the 16% range."

In the next two to five years, Boston will do well, says Jones. There is a lot of activity there because of close-in submarkets with high-tech companies, especially biotech, he says. "The south end of Boston is seeing development, even some construction, as a result of relocations by biotech and pharmaceutical companies," says Jones.  The vacancy rate in Boston today is 11.1% and is expected to be 10.3% in a year, he says.

In Miami, there have been three straight years of positive absorption and rents are creeping up, says Christian Lee, vice chairman, capital markets, institutional group at CBRE in Miami. "We expect to see more than 20% rent growth over the next five years, especially in the urban markets like the CBD and Coral Gables," he says.

"The biggest driver in the economy is tourism," says Lee. Tourism has come back, especially the cruise industry, he says. Plus, thousands of new condominiums have broken ground in 2012, mostly in Miami Beach, downtown and Coral Gables, notes Lee. "The population continues to grow," which means there is more need for accountants and lawyers, he says. In short, more need for office space.