Chicago's Retail Market On the Rise 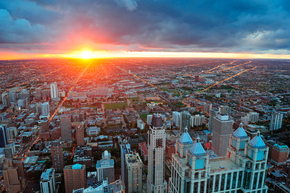 The Chicago retail market is having a resurgence based on a number of indicators, including retail vacancies.  In fact, retail vacancy has continued its steady decline since 2010, according to a third quarter CBRE MarketView report on Chicago's retail market.

During the third quarter, the Chicago retail market posted an 8.7 % vacancy rate, a 30 basis point decrease from last quarter, according to CBRE.

"Regional malls have some of the lowest vacancy rates, in the 3% to 4% range," says Mark Hunter, retail market lead for the Midwest at Jones Lang LaSalle in Chicago, although specialty stores' vacancy rates are higher. On Michigan Avenue, one of Chicago's most fashionable shopping districts, on the other hand, vacancy rates are about 3%, he says.

Although vacancies are down in the Chicago market, net asking rents were flat in the third quarter, only rising from $16.76 per square foot in the second quarter to $16.77, according to CBRE's MarketView, which reports the average for the metropolitan area for all type of centers. Asking rents at premium malls' start at $40 per square foot, says Hunter.

Retail investment sales have picked up over the last year in Chicago and other major markets, says Hunter. "Trophy properties are trading at a premium," he says.

According to a story in the Sacramento Bee on October 12, 2012, CalPERS is in discussions to buy a 50% interest in Woodfield Mall in Schaumburg, Illinois, the biggest mall in the Chicago area and one of the premier malls in the US. The California Public Employees' Retirement System is working on the deal with Miller Capital Advisory Inc., a Chicago-area firm that is in partnership with CalPERS on about $2 billion worth of shopping centers already, according to the Sacramento Bee which also credits Crain's Chicago Business as having first reported the story. The partnership already owns a 50% share of Woodfield and is negotiating to buy the remaining half from a General Motors Co. pension fund. Crain's reported that the deal would value the entire mall at about $1 billion, or $900 per square foot.

Trophy malls in Chicago can trade at a cap rate of about 5.5% to 6%, says Hunter, although a few have traded under 5.5%. This is 100 to 200 basis points lower than three or four years ago, he says. In comparison, grocery anchored centers usually trade at cap rates of about 7%, while community centers, depending on the location, usually trade in the 9% to 10% range or higher, says Hunter.