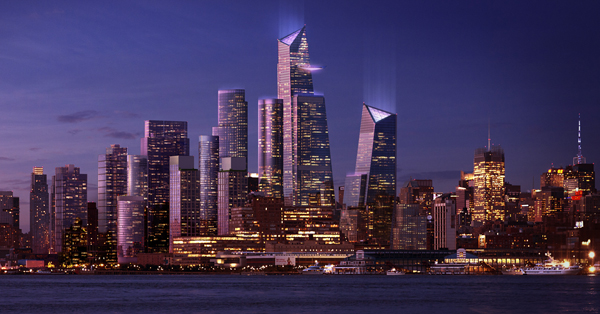 A city within a city was launched on Tuesday of this week, when ground was broken for the first building in the approximately $15 billion mixed-use Hudson Yards development on the west side of Manhattan.

The developers are the Related Companies and the Canadian-based Oxford Properties Group. The project has been in the works for almost a decade, beginning in 2004 when Michael Bloomberg's administration introduced a master plan which involved the rezoning of a railroad yard at the site.

"For 21st Century New York, today is our moment as we start the Hudson Yards, one of the most ambitious developments ever undertaken in the country. Hudson Yards will be the new heart of New York City with state-of-the-art commercial space, vibrant retail and restaurants, a unique cultural center, over a dozen acres of public space with iconic plazas and important public art, a (public) school, residences and affordable housing," said Related Companies Founder and Chairman Stephen M. Ross. "Mayor Bloomberg and his administration showed bold leadership and with the partnership of the Metropolitan Transportation Authority, (New York City Council) Speaker (Christine) Quinn, and the Council and the community, today, we see our collective vision come to life..." he said.

The first building at Hudson Yards, a 26-acre development, will be a 47-story, 1.7 million square foot office/retail building, to be known as the South Tower. It will have a "soaring atrium" and will be connected by a 750,000-square-foot retail component to the North Tower, which will be built later. The South Tower is scheduled for completion in 2015.

Coach Inc. (COH), a luxury handbag maker, has agreed to purchase almost 740,000 square feet in the South Tower and locate its headquarters there. The North Tower will be residential and it will have an attached cultural "shed" that will have gallery and performing space.

The Hudson Yards development, when completed, will be an expansion of the Midtown Manhattan central business district to the west side. Related is planning to build over 12 million square feet at the development, which will be one of the largest private developments in the country. Although it is a private development, the city's investment in new infrastructure for the area will be very beneficial to Hudson Yards, for example, the city-funded extension of the 7 train, which runs from Queens to Midtown Manhattan and now will be extended to the west side and will be completed in 2014.

Most of Hudson Yards will be built on a platform over the Metropolitan Transportation Authority's train yards near the Hudson River. The yards are a staging area for Long Island Railroad trains that terminate at Pennsylvania Station to the east. The only two buildings to be built on solid ground at Hudson Yards will be the South and North Towers, mentioned above.

The start of construction at the Hudson Yards project comes seven years after Mayor Bloomberg tried to get approval for a stadium at the site, in preparation for the Olympic Games. New York lost out in its bid to become the site for the games and the stadium, which was to be used for the Olympics, also did not get approved. Three years later, Related secured development rights at the site.