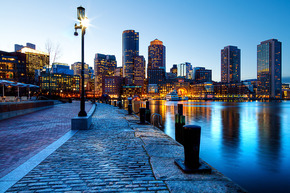 Commercial real estate prices in Manhattan over the 12 months ending September 30th were up 16.3%, according to Moody's/RCA Commercial Property Price Indices (CPPI). What this means is that New York  has joined the exclusive club of major metropolitan areas with the greatest price gains in that period, Boston being the only other market in that category.

The Moody's/RCA Commercial Property Price Indices measure price changes in US commercial real estate based on completed sales of the same commercial properties over time.

Boston is leading other markets, says Tad Philipp, director of commercial real estate research at Moody's Investors Service in New York, because it has more barriers to entry and strength in sectors that are doing well. It is one of six cities that have robust financial and tech markets, which helps commercial real estate retain its value, he says. Of all the major metros, Boston is closest to reaching its peak pricing, which was less than 1% below that level at the end of September.

As for New York, it is still the biggest attractor for international capital, says Philipp. This position hasn't been compromised by Hurricane Sandy, he says. There has been talk of building a flood gate for the city, says Philipp, and New York is looking to Holland on how to deal with rising sea levels, "but these things won't happen any time soon," he says.

Regarding the CPPI data from September, Philipp said, "I always knew that Manhattan would be a strong performer, but the degree of magnitude, was surprising. It jumped ahead of the rest because when people are looking to put out capital, New York City is still number one on their list."

According to the CPPI, there is a lot of price variation among metropolitan areas and among commercial real estate sectors. At the top is the apartment sector in major markets, which, according to CPPI, had regained 97.3% of its December 2007 value as of September 30th, followed by CBD office in major markets, which recovered 87.8% of its December 2007 value. Next was CBD office which recovered 76.3% of its peak value.

The strength of the apartment market has a lot has to do with Fannie Mac and Freddie Mae, says Philipp. But the CMBS market had to come back for there to be capital for other commercial real estate sectors, he says.

Looking at the US as a whole, Philipp says that the country's commercial real estate market had recovered about half of its value from peak to trough as of September 30th. The apartment sector has recovered to within 12.2% of its December 2007 peak value, while core commercial is 25.2% below its December 2007 value, according to the CPPI.

CBD office remains the star of the core commercial sectors, increasing by 5.0% and 19.7% over the last three and 12 month periods ending September 30th, respectively, according to the CPPI.

Of the six metro areas the CPPI designate as major for calculating CPPI, Boston, New York and San Francisco saw the greatest price gains over the last 12 months ending September 30th, up by 10.4%, 8.0% and 7.8% respectively. New York got a boost from Manhattan, which makes up about one third of the region's repeat sales and in which prices have risen by 16.3% over the 12 month period mentioned above.