Simon Property Group, the largest owner of shopping centers and malls in the United States, raised its earnings forecast for the year today, based on increased sales and higher rents.

Simon, which operates as a REIT, reported a 14.4 percent increase in funds from operations during the first quarter, to $741.9 million, or $2.05 per share from $648.7 million or $1.82 per share from the same period last year, according to Bloomberg.

"There's more demand for good quality mall space than there is supply," John Sheehan, an analyst at Edwards Jones, Told Bloomberg. "If the whole group is improving, that should bode well for the largest mall landlord in America."

Simon owns or has an interest in 327 properties in North America and Asia, accounting for 242 million square feet, according to the company's website. The portfolio includes several of the largest malls in the U.S., including New York's Roosevelt Field Mall and Woodbury Common Premium Outlets, the Forum Shops at Caesars Palace in Las Vegas, and Atlanta's Lenox Square Mall. 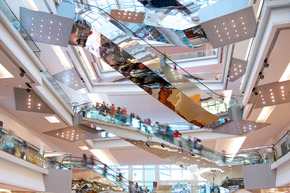 The REIT reported an increase of 5.3 percent in sales to $575 per square foot at its U.S. major malls and outlet centers.

Occupancy at Simon malls increased to 94.7 percent from 93.6 percent from a year earlier, allowing the REIT to increase rents by 13.4 percent to $41.05 per square foot for new leases.

With international outlet centers in Canada, Malaysia, Japan, Korea and Europe, Simon is the only real estate company in the Standard & Poor's 100 index. Its stock has increased 4.2 percent since the start of the year, with its closest competitor, General Growth Properties Inc, increasing 1.6 percent, Bloomberg reported.