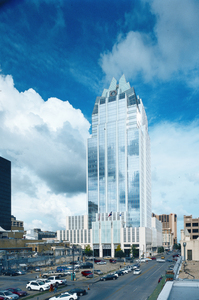 Los Angeles-based Thomas Properties Group, Inc. and the California State Teachers' Retirement System together purchased an eight-building, three-million-square-foot portfolio of office properties in downtown and suburban Austin, Texas. The purchase price was $859 million, which is subject to prorations and adjustments. The deal closed yesterday.

Thomas Properties has been engaging in a deleveraging strategy, says Sischo. In a statement from last December by Jim Thomas, chairman and CEO of Thomas Properties, he said, "Our strategic plan, announced earlier this year, includes pruning selected properties and reinvesting proceeds from those sales in properties with repositioning opportunities and/or greater internal growth." The fourth quarter 2011 sales of Centerpointe I & II, an office complex with adjacent land in Houston, and a parcel of land in El Segundo, California, have generated a combined $25.5 million in net proceeds to the company and demonstrate continued momentum in the execution of our plan."

In January, Thomas Properties Group affiliate TPG/CalSTRS announced that it had sold the 806,004 square-foot, three-building property in Houston known as  Brookhollow Central. TPGI's share of the net proceeds from that sale was approximately $8 million, after closing costs and repayment of mortgage debt.

"The properties we now own are high-quality assets in growth areas, that are very difficult to duplicate," says Sischo. Thomas Properties is planning to become a REIT, by increasing its interest in assets that it already has partnerships in, he says, although there is no timetable for this eventuality.

Although Thomas Properties has an interest in roughly 2.5 million square feet in the Mid Atlantic, "we have a westerly (West Coast) bias for new investments," says Sischo.

Included in the Austin portfolio are five downtown properties known as Frost Bank Tower, One American Center, San Jacinto Center and One Congress Plaza as well as suburban properties.