"Florida's strengthening economy and increased jobs outlook are positive signs for continued growth in the state's housing market," said 2014 Florida Realtors President Sherri Meadows, CEO and team leader, Keller Williams, with market centers in Gainesville, Ocala and The Villages. "Statewide, new listings for single-family homes in April rose 9.2 percent year-over-year, while new townhouse-condo listings rose 1.4 percent. This increase in listings shows many Florida homeowners are continuing to regain equity in their homes. Potential sellers who were on the sidelines now believe the time is right to put their residences on the market. 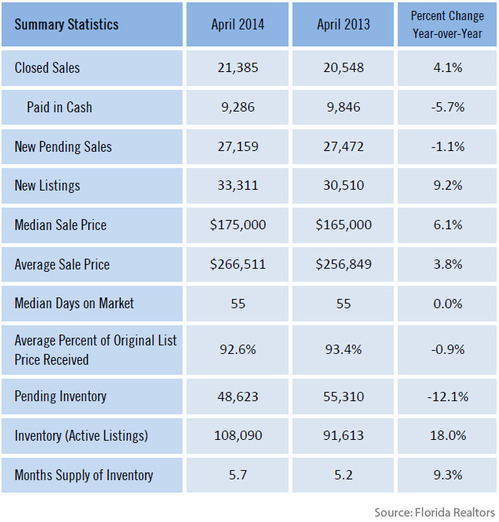 "And, for the 29th month in row, median sales prices rose year-over-year for both single-family homes and townhome-condo properties."

The statewide median sales price for single-family existing homes last month was $175,000, up 6.1 percent from the previous year, according to data from Florida Realtors Industry Data and Analysis (IDA) department in partnership with local Realtor boards/associations. The statewide median price for townhouse-condo properties in April was $140,500, up 9.8 percent over the year-ago figure. The median is the midpoint; half the homes sold for more, half for less.

"We continue to see the development of a sustainable market here in Florida," said Florida Realtors Chief Economist Dr. John Tuccillo. "The numbers all suggest a balanced market, and the slight uptick in inventory is a correction for the historically low levels we've seen over the past two or three years.

"If there's anything that jumps out of these numbers, it is the rapidly disappearing short sale market. The decline in short sales - a characteristic seen all over the country - is a function of rising prices reducing the number of candidate properties for short sales. We expect this will continue as the market continues to improve."

Inventory was at a 5.7-months' supply last month for single-family homes and at a 6-months' supply for townhouse-condo properties, according to Florida Realtors.

According to Freddie Mac, the interest rate for a 30-year fixed-rate mortgage averaged 4.34 percent in April 2014, up from the 3.45 percent average recorded during the same month a year earlier.