According to RealtyTrac's July 2014 U.S Residential & Foreclosure Sales Report, U.S. residential properties, including single family homes, condominiums and townhomes, sold at an estimated annual pace of 4,634,513 in July, down 3 percent from the previous month and down 12 percent from a year ago -- the third consecutive month where annualized sales volume has decreased on a year-over-year basis.

The median price of U.S. residential properties sold in July -- including both distressed and non-distressed sales -- was $191,000, up 3 percent from the previous month, and up 12 percent from a year ago to the highest level since September 2008, a 70-month high.

"As distressed sales continue to decline, the share of sales is tilting toward more expensive homes, boosting the nationwide median sales price," said Daren Blomquist, vice president of RealtyTrac. "The nationwide home price increase, however, masks slowing home price appreciation in the majority of housing markets across the country. This slowing appreciation was expected and provides another sign that the real estate recovery thus far is behaving rationally. Still, the housing market is entering a dicey transition phase where it is becoming much more reliant on first-time homebuyers and move-up buyers to sustain the recovery as investor involvement wanes."

"Coastal areas in Southern California that were first to rebound from the distressed-heavy market last year are slowing to more long-term sustainable growth," said Chris Pollinger, senior vice president of sales at First Team Real Estate, covering the Southern California market.  "Other areas have finally worked through their distressed inventory and are seeing significant price increases while the pent up demand for new inventory by inventors, flippers and prospective home buyers is prevalent." 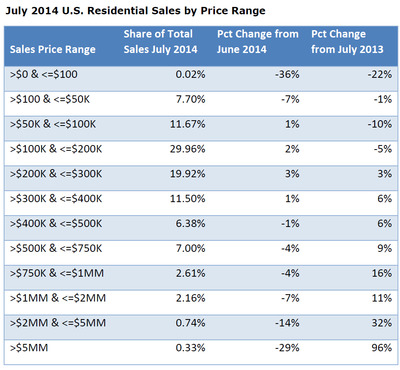 "The Seattle housing market continues to perform strongly thanks in large part to the health of our local economy, while our biggest challenge is the supply of homes available to buyers," said OB Jacobi, president of Windermere Real Estate, covering the Seattle market.  "In Seattle we currently have about one month's supply of inventory compared to a healthy market that should have four to six months.  The result is a highly charged, highly competitive housing market where many homes are drawing multiple offers and selling for well above list price.

"At the same time, the double-digit price increases we saw in months past have slowed somewhat, which is actually a good thing because as history has taught us, this kind of sustained appreciation can lead to boom and bust cycles that none of us want to relive," Jacobi added.

"The Denver housing market experienced its typical end-of-summer lull, however, homes under $300,000 are still moving rapidly, many with multiple offers," said Phil Shell, managing broker at RE/MAX Alliance, covering the Denver market.  "The overall market is not as frantic as it was during spring of this year but it is still brisk, and pricing is becoming more important when listing a property as the overpriced inventory is sitting for longer periods of time."

Short sales and distressed sales -- in foreclosure or bank-owned -- accounted for 13.6 percent of all single family and condo sales in July, up from 12.8 percent in June but down from 15.0 percent in July 2013.

Short sales accounted for 4.5 percent of all single family and condo sales in July, up from 3.5 percent in the previous month but down from 5.2 percent a year ago.

Bank-owned (REO) sales accounted for 8.0 percent of all single family and condo sales in July, down from 8.1 percent in the previous month and down from 9.1 percent a year ago to the lowest level since January 2011.

Sales at the foreclosure auction accounted for 1.2 percent of all single family and condo sales in July, up from 1.1 percent in June and up from 0.8 percent in July 2013.