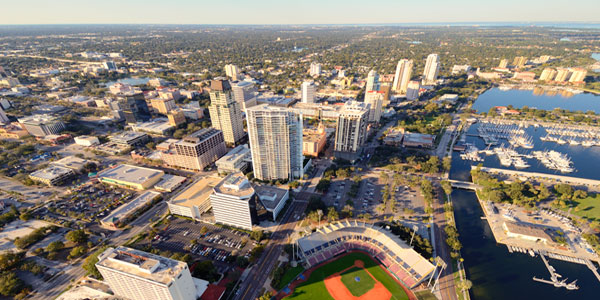 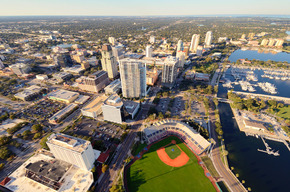 According to Clear Capital's latest Home Data Index (HDI) Market Report for January 2013, quarterly US home price trends both nationally and regionally strengthened with the exception of the Midwest, while major metro markets in Florida missed the top performing list for the first time since September 2011.

"Home price trends in January remained solid overall, considering we are in the middle of the toughest time of year for real estate, "said Dr. Alex Villacorta, Director of Research and Analytics at Clear Capital."We saw quarterly trends continue to soften, while yearly gains strengthened, suggesting the budding recovery is not immune to the slower winter season. What remains to be seen is if home prices will continue to rise, or remain stable through the winter. Regardless of what trends play out in the near term, we expect home prices to continue on a positive trajectory long term.

"On a more micro level, Florida metros, namely Miami, Orlando, Tampa, and Jacksonville, were all missing from the top 15 performing market list. Since September 2011, at least one of these markets made the list.  While this isn't confirmation that the recovery is finished in the sunshine state, it's certainly something to keep an eye on. These markets led the recovery in late 2011, and share some of the hallmarks for recovering markets overall. But so far, each of these metros remains in positive territory, and it looks like the state is simply experiencing what is par for the course, fewer buyers in the typically slow winter season."

At the national level, home prices in January advanced 0.9% over the rolling quarter, unchanged over December's rate of growth. While national prices were mostly flat, they are still in positive territory. When compared to quarterly declines of 1.6% this time last year, it's apparent the housing market continues to make progress, despite the typically slow winter months.

Home prices in the West also continued to improve, with growth of 2.1% over the last rolling quarter. Like national trends, the West's price growth held steady over December's quarterly rate of growth. The Western region experienced the most significant short term price growth out of all the regions, and it's not surprising that 11 out of the 15 top performing metros reside in the West.

Very little quarterly price change took place in the South, Northeast, and Midwest. Quarterly home prices in the South rose 0.7%, a slight improvement over the prior month. The Northeast's small quarterly advancement of 0.6% is noteworthy because it's double December's rate of growth. The region continues to turn out slow yet steady growth, with each of its price tiers making small steps in the right direction.

The Midwest experienced the lowest quarterly growth of all the regions, at just 0.2%, due to a handful of major metros experiencing flat prices. Chicago and Detroit helped put the brakes on the region's growth overall, and considering the season, these trends don't raise too much concern. 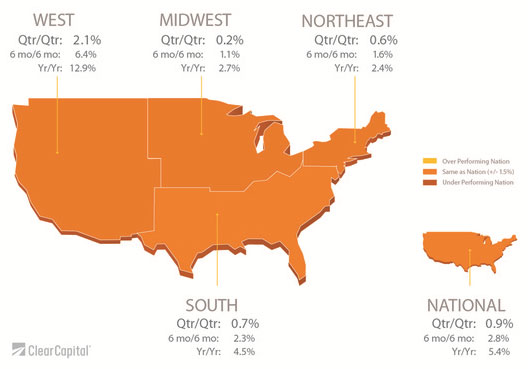 January Yearly Trends: Higher growth at the national and regional level, with the exception of the Midwest.

National home prices in January rose 5.4% over the prior year, a continuation of 2012's positive trajectory. The main driving force in markets across the U.S. continued to be the low tier priced segment, those homes selling for $102,000 and less, of which many are REO sales. While the national REO saturation rate in January held at 18.4%, well off the peak of 41.0% in March 2009, REO properties remain attractive to investors and homebuyers alike. REO sales continue to make an impact on the overall health and recovery of the housing market. The HDI's equal weighting of REOs alongside fair market transactions provides the most accurate picture of the current state of the housing market.

Once again, the West recorded the highest yearly growth of all the regions, at 12.9%. As the market adjusts to a higher price floor and declining REO saturation, its likely future price trends will moderate. REO saturation in the West in now at just 17.2%, drastically improved from the peak of 52.5% in March 2009. The correlation between price trends and REO saturation continues to be a key indicator of market performance.

The South also continued to make progress, with yearly gains of 4.5% in January. The recovery in the South has a long way to go before total losses of 33.1% are recouped. January home prices in the Northeast rose 2.4% over the last year. While this rate of growth is the lowest out of all the regions, it's an impressive jump over December's yearly rate of growth of 1.5%.

Yearly price gains of 2.7% in the Midwest retreated slightly when compared to last month's 3.0% rate of growth. Similar to quarterly trends, some large markets in the Midwest, like Chicago, haven't fueled yearly growth. Meanwhile Detroit, with yearly gains of 7.1%, aided the region's yearly gains overall.

Most notably in January, the top 15 major metro list did not include any Florida markets. September 2011 was the last time a Florida metro didn't make the list. While it's too early to speculate a stall in Florida's recovery, January's performance could be an indication of more moderate growth for a handful of the metros that led the national recovery in late 2011. 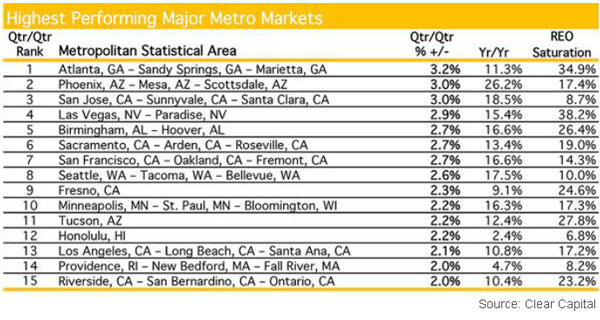 The lowest performing metro markets firmly held their ground in January, with zero (0.0%) change in home prices over the rolling quarter. In addition, each metro within the group experienced quarterly price change within 1.7 points of one another, ranging from -1.1% to just 0.6%.

Overall, January's home price trends confirm the housing market continues to hold up well in the midst of the toughest season of the year. Yet, Florida's metros falling short of the top performing 15 markets for the first time since late 2011 offers caution that there could be shifts in the status quo to come, as buyers adjust to higher priced markets a year into recovery. Even so, solid yearly home price gains offer a cushion for minor setbacks or shifts over the near term. 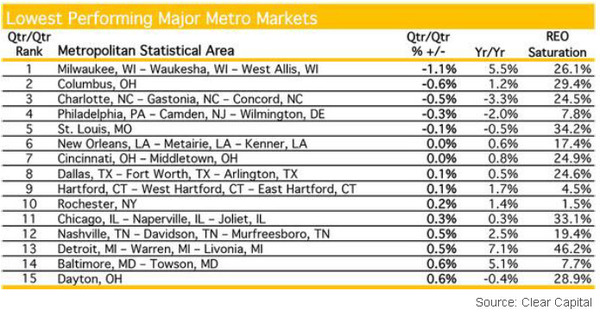