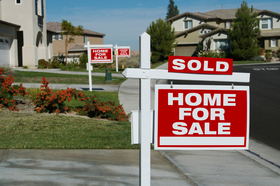 "Home prices rose in the third quarter, marking the sixth consecutive month of increasing prices," says David M. Blitzer, Chairman of the Index Committee at S&P Dow Jones Indices. "In September's report all three headline composites and 17 of the 20 cities gained over their levels of a year ago. Month-over-month, 13 cities and both Composites posted positive monthly gains.

"The National Composite increased by 3.6% from the same quarter in 2011 and by 2.2% from the second quarter of 2012. The 10- and 20-City Composites have posted positive annual returns for four consecutive months with a +2.1% and +3.0% annual change in September, respectively. Month-over-month, both Composites have recorded increases for six consecutive months, with the most recent monthly gain being +0.3% for each Composite.

"Phoenix continues to lead the recovery with a +20.4% annual growth rate. Atlanta has finally reversed 26 months of annual declines with a +0.1% annual rate as observed in September's housing data. At the other end of the spectrum, Chicago and New York were the only two cities to post annual declines of 1.5% and 2.3% respectively and were also down 0.6% and 0.1% month-over-month.

"Thirteen of the 20 cities recorded positive monthly returns; Boston, Charlotte, Chicago, Cleveland and New York saw modest drops in home prices in September as compared to August; Tampa and Washington D.C. were flat. With six months of consistently rising home prices, it is safe to say that we are now in the midst of a recovery in the housing market."

In September 2012, 13 MSAs and both Composites posted positive monthly gains. Home prices in Tampa and Washington DC saw no change from August to September. Boston, Charlotte, Chicago, Cleveland and New York saw a slight drop in prices in September. Phoenix recorded the highest increase in annual rate, up 20.4% from its September 2011 level. Chicago and New York were the only two cities that fared worse year-over-year with respective annual rates of -1.5% and -2.3%.

The table below summarizes the results for September 2012. The S&P/Case-Shiller Home Price Indices are revised for the 24 prior months,