Another crane will soon be rising on Miami's skyline with the addition of Le Parc at Brickell, a new boutique condo projected being developed in Downtown Miami's Brickell Financial District.

The project is a joint venture partnership between South Florida-based developers Strategic Properties Group and ALTA Developers. The 12-story boutique-style building is located just off Brickell Avenue overlooking the historic Simpson Park at 1600 SW 1st Avenue and is scheduled for completion in late 2015.

"Le Parc at Brickell will deliver a one-of-a-kind living experience that you won't find anywhere else in Miami," said Henry Pino, president of Strategic Properties Group, on behalf of the project's joint venture development team. "Our unique location offers residents the best of both worlds - the convenience of being connected to the energy of Brickell just a few blocks away, with the privacy that comes with living in a quiet neighborhood away from the congestion."

Le Parc at Brickell's 128 residences will include one-, two-, and three-bedroom units, as well as studios and exclusive two-story townhomes. Units will feature private terraces with panoramic views of Simpson Park, the Miami skyline and Biscayne Bay. The building's common area interior designs and furnishings will be inspired by the world-renowned Ligne Roset - with custom-designed Turn-Key Furniture Lifestyle Packages available for purchase. Preconstruction prices range from the low $300,000's to about $700,000.

"Once completed, Le Parc at Brickell will be an urban oasis in the heart of one of Miami's most dynamic downtown districts," said Alicia Cervera Lamadrid, managing partner of Cervera Real Estate, the project's exclusive sales and marketing broker. "With an unbeatable location and a world-renowned design partner, Le Parc at Brickell continues to attract buyers in the market for a Brickell condo with luxury amenities at a lower price-point."

Directly next door to the Le Parc at Brickell site, construction of a 274-room hotel by Atton Hotels - a well-known South American hospitality company founded in 2000 with hotel properties throughout in Chile and Peru - is well underway and slated for completion in 2015. Atton Hotel's Brickell property will become the brand's first U.S. location, marking its entrance into the American market. The hotel will be an added amenity to the neighborhood, featuring contemporary rooms, multiple pool and lounge areas, on-site dining, and meeting space for business and social events. As an added perk, Le Parc at Brickell residents will receive Atton VIP cards that offer discounted pricing on Atton's hotel rooms, event space, dining and parking. 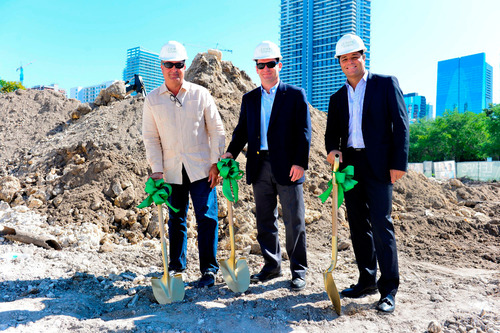 Le Parc at Brickell's setting in Miami's pedestrian-friendly Brickell entrance neighborhood - defined as the district surrounding Brickell Avenue and South Miami Avenue - provides residents an easily-accessible, central location in one of the city's most dynamic urban districts. Dozens of high-end restaurants, lounges, hotels and shops are within a few blocks. The Mary Brickell Village dining and retail district and the now-underway Brickell CityCentre mixed-use project are both a short walk away. Multiple public transit options connect Le Parc at Brickell with Miami's star attractions, including American Airlines Arena, the Adrienne Arsht Center for the Performing Arts, Miami Art Museum and Miami Science Museum in Museum Park, and Bayfront Park.