The bulk of the total value lost during 2011 was in the first half of the year. From January to June, the U.S. housing market lost $454 billion. From July to December, Zillow projects residential home value losses will total a significantly lower $227 billion.

Regionally, only nine out of 128 markets showed gains in home values during 2011, with the New Orleans metropolitan statistical area (MSA) showing the largest gain of $3.5 billion. The Pittsburgh MSA was second on the list, with a gain of $2.7 billion.

"While homeowners suffered through another year of steep losses, the good news is that homes are losing value at a substantially slower pace as the market works its way towards the bottom," said Zillow Chief Economist Stan Humphries. "Compared to last year when we saw sharp declines following the expiration of the homebuyer tax credits, this year we saw some organic improvement in home values, in terms of a slowed depreciation rate which resulted in a smaller total value loss for the year." 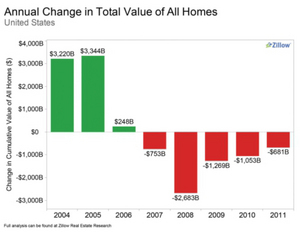 "Unfortunately, when we look ahead to next year, the unabsorbed pool of housing supply, dragging levels of consumer confidence, high unemployment and negative equity will continue to put downward pressure on the housing market, pushing our expectation for a potential recovery into late 2012 or early 2013," continued Dr. Humphries.

The majority (92 percent) of markets analyzed for this report showed home value losses this year. The biggest home value losses, in terms of total dollars lost in 2011, were in the large MSAs of Los Angeles (down $75.5 billion), New York (down $44.8 billion) and Chicago (down $41.7 billion). The large overall losses were due to the high number of homes in these metro areas, along with decreases in median home values.