U.S. Home Prices Rise 6% in May, Aided by Higher-end Sales


According to RealtyTrac's May 2014 Residential & Foreclosure Sales Report, U.S. residential properties, including single family homes, condominiums and townhomes, sold at an estimated annual pace of 5,147,550 in May, virtually unchanged from April and an increase of less than 1 percent from May 2013.

The median sales price of U.S. residential properties -- including both distressed and non-distressed sales -- was $180,000, up 6 percent from the previous month and up 13 percent from a year ago. The year-over-year increase in May was the second consecutive month with a double-digit annual increase in U.S. home prices, and the biggest annual increase since U.S. home prices bottomed out in March 2012.

"Distressed sales continue to represent a smaller share of the overall sales pie nationwide, helping to boost median home prices higher given that distressed sales tend to be in lower price ranges," said Daren Blomquist, vice president at RealtyTrac. "When broken down by average price range, U.S. sales are clearly shifting away from the lower end. Properties selling below $200,000 represented 50 percent of all sales in May, but that was down from a 55 percent share a year ago. Meanwhile, the share of homes selling above $200,000 increased from a 45 percent a year ago to a 50 percent in May 2014."

Sales prices in every price range above $200,000 analyzed in the report increased as a share of total sales, both from the previous month and from a year ago, with the increase generally higher in the higher price ranges (see table below). 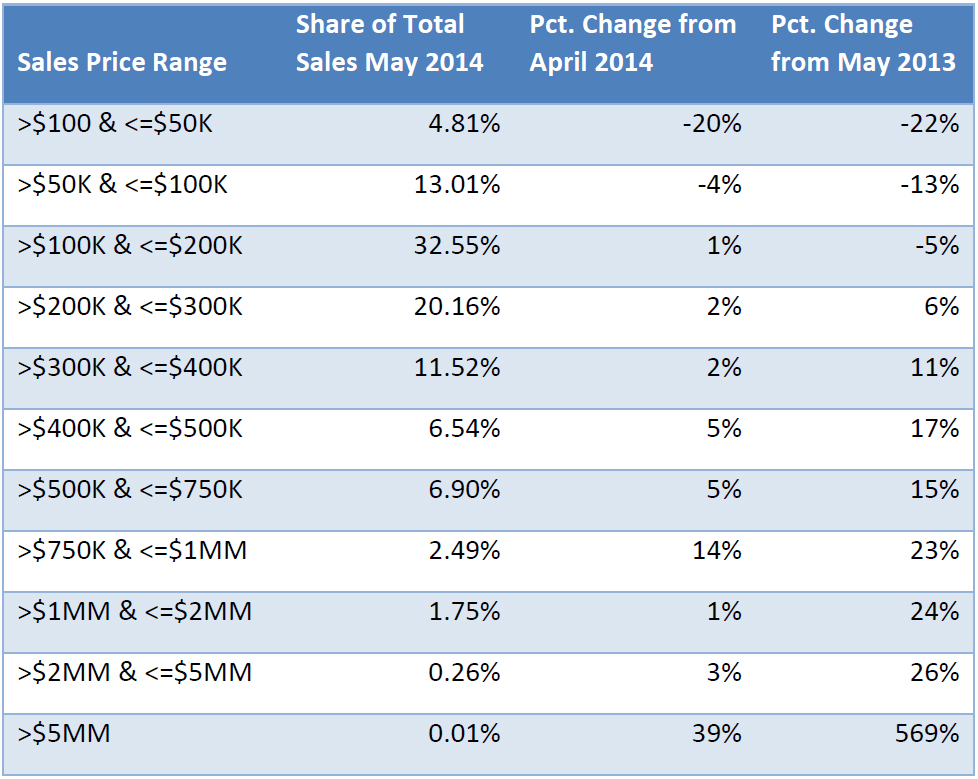 The 1 percent increase in U.S. annualized sales in May from a year ago was the smallest increase in any month so far this year, and the 0.19 increase from the previous month marked the eighth consecutive month with flat or declining home sales on a month-over-month basis.

Annualized sales volume in May decreased from a year ago in 23 states and the District of Columbia, along 31 of the nation's 50 largest metropolitan statistical areas.

Major metro areas with decreasing sales volume from a year ago included Boston (down 23 percent), Fresno, Calif., (down 22 percent), Orlando (down 18 percent), Los Angeles (down 16 percent), and Phoenix (down 13 percent).

As a supplement to the May U.S. Residential & Foreclosure Sales Report, RealtyTrac analyzed residential property sales transactions in the 12 months ending in March 2014 to pinpoint which types of distressed properties are selling at the biggest discounts based on foreclosure status, occupancy status, equity and year built range.

Based on this analysis, distressed properties with the biggest discount were those scheduled for public foreclosure auction that were vacant, had negative equity and were built between 1950 and 1990. Properties in this category sold for an average discount that was 28 percent below the control group of non-distressed sales.

Other distressed property profiles with discounts among the top five nationwide were the following:


Distressed properties selling at a premium