According to RealtyTrac's latest U.S. Home Equity & Underwater Report for the first quarter of 2014, 9.1 million U.S. residential properties were seriously underwater -- where the combined loan amount secured by the property is at least 25 percent higher than the property's estimated market value -- representing 17 percent of all properties with a mortgage in the first quarter. 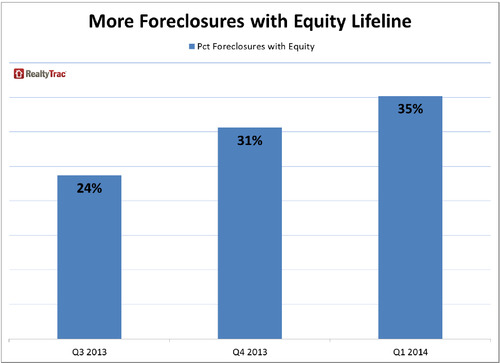 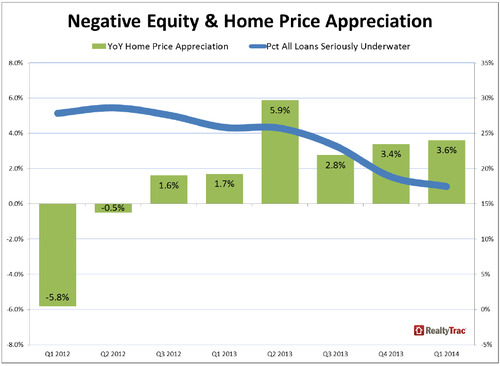 "U.S. homeowners are continuing to recover equity lost during the Great Recession, but the pace of that recovering equity slowed in the first quarter, corresponding to slowing home price appreciation," said Daren Blomquist, vice president at RealtyTrac. "Slower price appreciation means the 9 million homeowners seriously underwater could still have a long road back to positive equity. 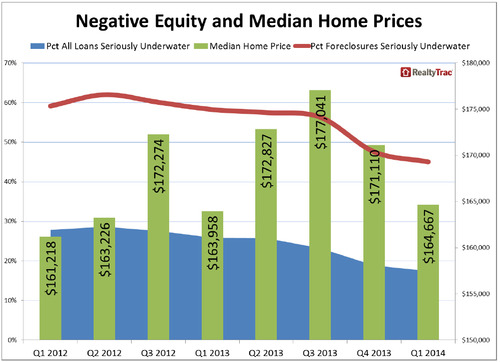 "Underwater properties have become an insignificant part of the housing market in Orange County," said Chris Pollinger, senior vice president of sales at First Team Real Estate, covering the Southern California market.  "Out of the nearly 40,000 properties we currently have listed only about 3,000 of those are distressed or short sale properties, proving that the continual rise in home prices is relieving the housing market of underwater homeowners."

Markets with most negative equity

Markets with most resurfacing equity 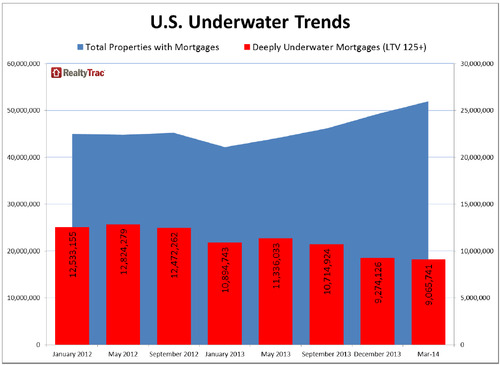 "Homeowners are no longer underwater on their homes like they were at the peak of 2012," said Sheldon Detrick, CEO of Prudential Detrick/Alliance Realty, covering the Oklahoma City and Tulsa, Okla., markets.  "Low housing inventory and more buyers are causing home prices to rise and sell over list price, giving homeowners who are moderately underwater a chance to avoid the foreclosure process."

Markets with most equity-rich properties

Markets with most positive-equity foreclosures 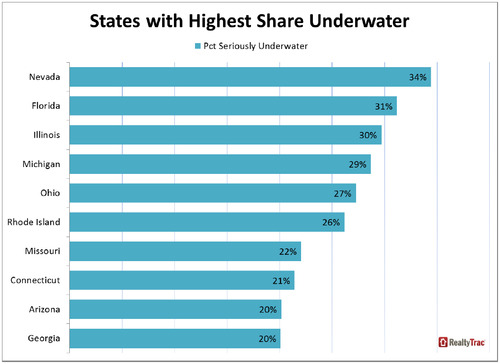 "Home prices continue to rise due to record-low inventory levels.  Our median closing price is now up to $313,846, which is substantially higher than it was a year ago, so there is no question that there are significantly fewer people who are underwater on their homes," said Phil Shell, a managing broker at RE/MAX Alliance, covering the Denver, Colo. market.

"The short sale market really dried up about nine months ago, but we do still see some short sale transactions with higher-priced homes in the $700,000 to $800,000 plus range," added Heidi Greer, also a managing broker at RE/MAX Alliance.