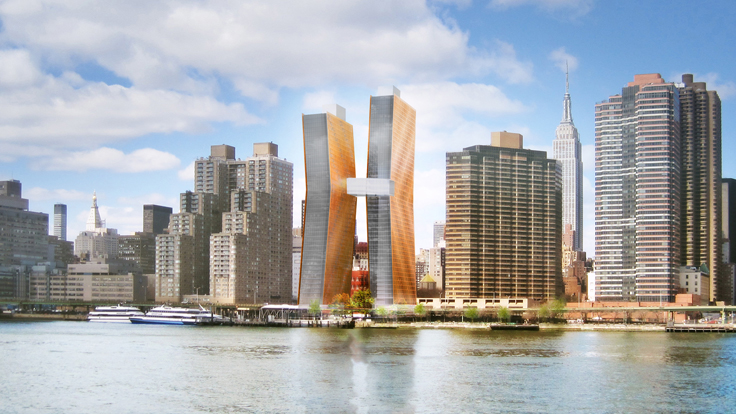 
Construction is expected to begin in the next few months on connected copper-clad residential towers on New York City's East River waterfront, which will add a dramatic new addition to the city's skyline. 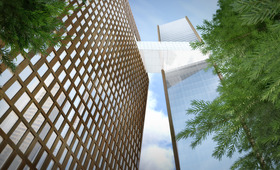 The curved towers, designed by SHoP Architects, will rise to 49 and 40 stories and offer 800 high-end apartments for rent. The bent towers will be connected by a skybridge, which will feature an indoor pool and a lounge area. The development will also have a rooftop deck with an infinity-edge pool, a fitness center, a boxing gym and a squash court.

But it is the buildings' distinctive "dancing" forms, simmering curtain walls and connected structures will make the project stand out 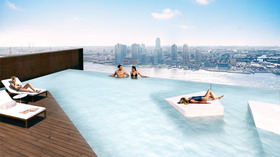 "The buildings are modern and fresh," Vishaan Chakrabarti, a partner at SHoP Architects, told the New York Times. "They dance with each other, not like Ginger Rogers and Fred Astaire, but like Shawn and Beyoncé."

The as-of-yet unnamed project will also revitalize a section of the waterfront that has been deserted for years.

In 2008 the city approved a $4 billion development for the 9.2-acre site, comprising seven towers, including designs by Richard Meier and Skidmore Owings & Merrill. But the project never moved forward and JDS Development purchased a little more than one acre for $172.5 million from developer Sheldon H. Solow, the Times reported. 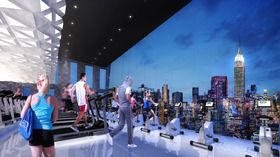 JDS brought in SHoP and charged the firm with creating an iconic design.

"This area hasn't seen any great architecture since the development of the United Nations" in 1947, Mr. Chakrabarti told the Times. "This could be a harbinger of things to come in terms of getting more innovative design along the East River."

At this point the pile work has started on the towers, with worked expected to begin on the foundation in the next few months after the buildings are fully approved, a SHoP spokeswoman said. 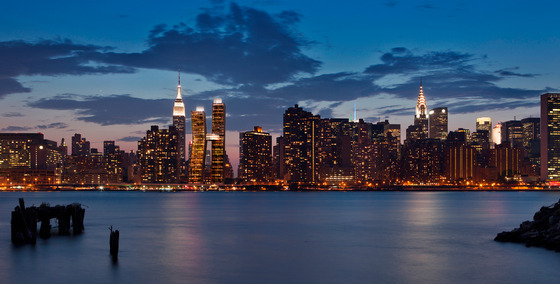