According to the latest S&P/Case-Shiller Home Price Index released this week, U.S. home prices decreases of 1.1% and 1.2% for the 10- and 20-City Composites in October vs. September.

Miami saw no change in annual returns in October; while Atlanta, Detroit, Las Vegas, Los Angeles and Minneapolis saw their annual rates worsen. At -11.7% Atlanta posted the lowest annual return. Detroit and Washington DC were the only two cities to post positive annual returns of +2.5% and +1.3%, respectively. 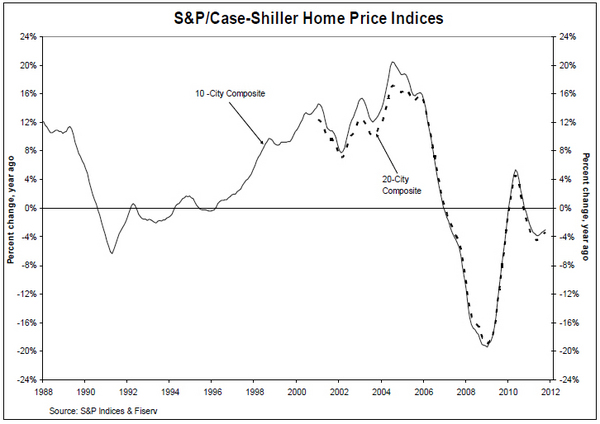 "There was weakness in the monthly statistics, as 19 of the cities posted price declines in October over September," says David M. Blitzer, Chairman of the Index Committee at S&P Indices. "Eleven of the cities and both composites fell by 1.0% or more during the month. And even though some of the annual rates are improving, 18 cities and both Composites are still negative. Nationally, home prices are still below where they were a year ago. The 10-City Composite is down 3.0% and the 20-City is down 3.4% compared to October 2010.

"Atlanta and the Midwest are regions that really stand out in terms of recent relative weakness. Atlanta was down 5.0% over the month, after having fallen by 5.9% in September. It also has the weakest annual return, down 11.7%. Chicago, Cleveland Detroit and Minneapolis all posted monthly declines of 1.0% or more in October. These markets were some of the strongest during the spring/summer buying season.  However, Detroit is the healthiest when viewed on an annual basis. It is up 2.5% versus October 2010.

Atlanta, Cleveland, Detroit and Las Vegas are four markets where average prices are below their January 2000 levels; and Atlanta and Las Vegas posted new lows in October.

"Some of the other housing statistics posted relatively healthy figures for November, but it seems that most of the good news was confined to the multi-family sector. Existing home sales rose in November, but are still at a low annual rate of about 4.0 million. Single family housing starts also rose, but remain close to record lows and are still down about 1.5% versus October 2010." 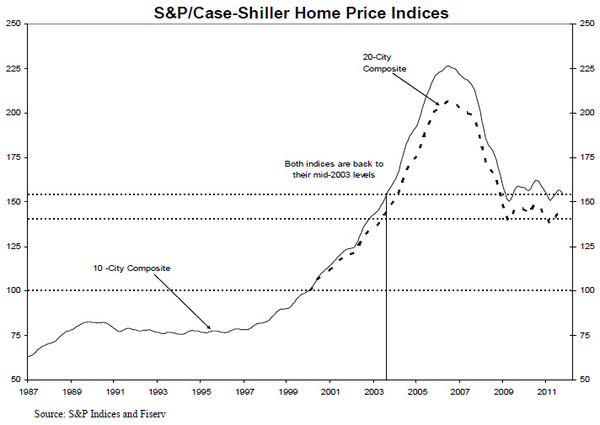 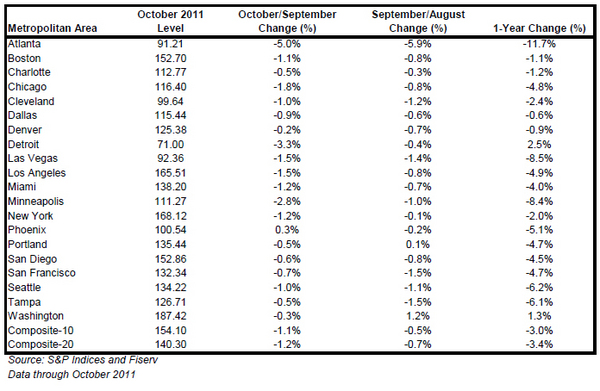