Today RealtyTrac released a special report on the best beach town housing markets in the U.S. based on home values, weather, air quality and crime rates; and Key Biscayne made the list.

The RealtyTrac study first selected the top 100 best beach towns based on four criteria: average temperature, percent of sunny days, percent of days with good air quality, and crime rates. The top 100 towns based on these criteria were then sorted by median value of single family homes and condos, from lowest to highest. The top 20 markets all had median home values below $1 million.

"Buying near the beach is one of the best ways to ensure a property will appreciate in value," said Daren Blomquist, vice president at RealtyTrac. "Whether buying for retirement, a vacation home or a primary residence, homes located in quality beach towns benefit from virtually unlimited demand and a finite supply of land to build on." 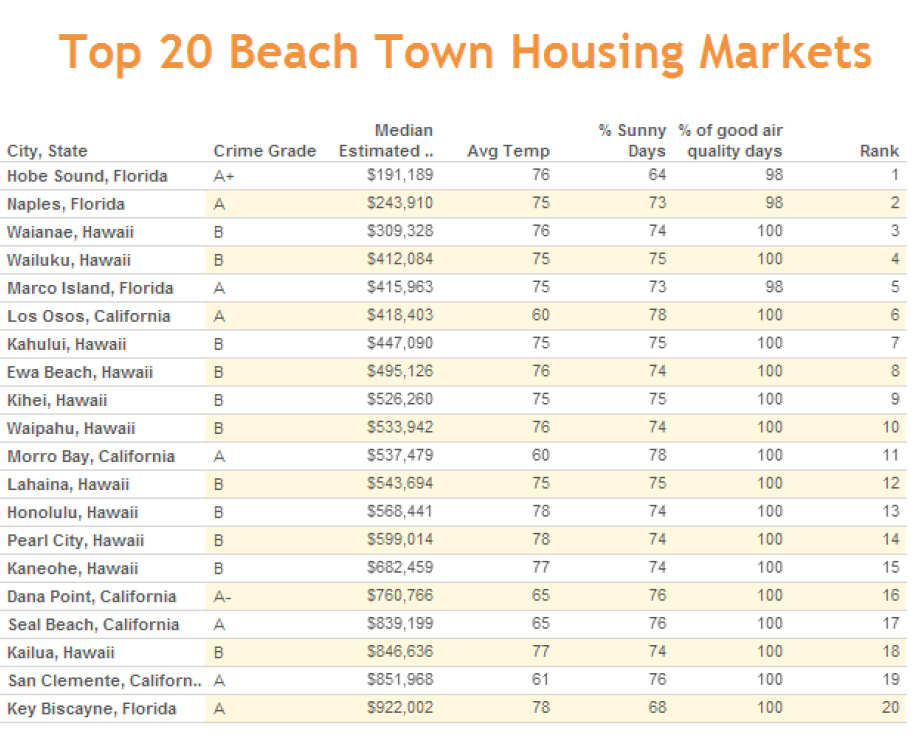 Four of the top 20 beach town housing markets were in Florida, led by Hobe Sound, a town of less than 15,000 located in Martin County about halfway between West Palm Beach and Port St. Lucie. Hobe Sound had an average temperature of 76 degrees, 64 percent sunny days, 98 percent of days with good air quality and a crime grade of A+. The town ranked No. 1 on the list thanks to its low median estimated market value of homes and condos: $191,189.

As World Property Channel has previously reported, Key Biscayne has enjoyed a 36 percent price increase since the housing bottom.

Hawaii accounted for 11 of the top 20 beach town housing markets, the most of any state, led by Waianae in Honolulu County on the island of Oahu. An average temperature of 76 degrees, 74 percent sunny days and 100 percent days with good air quality boosted Waianae into the 100 best beach towns, and a relatively low median home value of $309,328 helped it rank No. 3 among the top 20.

Five California beach towns were in the top 20, led by Los Osos in San Luis Obispo County on the Central Coast of the state. The town of about 15,000 had an average temperature of 60 degrees, 78 percent sunny days, 100 percent good air quality days and an A crime rate grade. Its $418,403 median home value was the lowest among all California beach towns on the list and ranked it No. 6 among the top 20.

Other California beach towns among the top 20 were Morro Bay at No. 11, also on the state's Central Coast, along with the Southern California towns of Dana Point at No. 16, Seal Beach at No. 17, and San Clemente at No. 19.