With the death of Venezuelan president Hugo Chavez, the Miami property market may lose some of its most prolific buyers.

Venezuelans accounted for 16 percent of the international purchases in Miami in 2012, the largest group of foreign buyers in the city, according to the Florida Association of Realtors' annual international home buyer study. 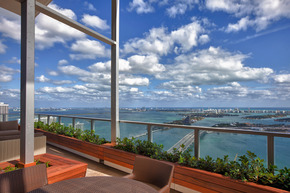 Many of those buyers were fleeing the Chavez regime, either for political or economic reasons. Now that Chavez is gone, the incentive to buy in Miami may disappear.

"Venezuelans may be sitting on the sidelines for the foreseeable future," said Peter Zalewski, a principal with Condo Vultures, a Miami-based real estate consultancy. "From an investment perspective, [Chavez's death] raises optimism that they can go back to Venezuela."

In the wake of Chavez's death, "there might be a little bit of slowdown in activity," especially among immigrants, said Miami realtor Valeria Grunbaum, who specializes in international buyers. But Venezuela investors looking for stability and an attractive currency exchange rate will still find Miami attractive, she says.

"It might change the political situation, but it won't change the economic situation," Ms. Grunbaum said. "Chavez was one of the factors [leading Venezuelans to Miami], but I don't think it was a major one."

Miami is not the only market affected. Overall, Venezuela accounted for 7 percent of international buyers in Florida in 2012, the third largest group of foreign buyers behind Canada and Brazil.

A win by Chavez supporters could lead to "a massive influx of Venezuelans buying property not only in Miami but all over the United States," said Rodrigo Nino, president of Prodigy Network, which markets properties around the world. "They are going to keep coming as long as there is an unstable environment [in Venezuela]."

More than half of the Venezuelan buyers in Florida in 2012 cited investment purposes as part of their motivation for purchasing the property, according to the Florida Association of Realtors' study. The political situation may not affect that motivation, property experts say.

"At this point, there does not appear to be the expectation that the relationship between the two countries will change significantly," said Jonathan Miller, president of Miller Samuel, the appraiser and consulting firm. "Based on that, I would anticipate the same level of investor interest to continue."

"Many of the recent buyers seem to be here for the long term," said Barbara Lamar, an agent with One Sotheby's International Realty in Key Biscayne. "Depending on the outcome of the upcoming election, we may see more movement in the market."

Continued instability in Venezuela could prompt another wave of buyers, which would help fuel Miami's property recovery. After years of steep declines, sales and prices in Miami have been steadily rising over the last 14 months, according to data compiled by the Miami Association of Realtors.

"While it's difficult to predict what effect Chavez's death will have on Venezuela and on South Florida's real estate market, Venezuelans have long enjoyed South Florida as their home for primary or secondary residences and for business," said Teresa King Kinney, chief executive officer of the Miami Association of Realtors.  "We hope for positive change in Venezuela, but there is much to do there."