Hong Kong-based Swire Properties' Swire Hotels group has just announced the opening of EAST, Miami at Brickell City Centre, a $1.05 billion mixed-use development in Miami's Brickell downtown district. Once opened in 2015, it will be the company's first hotel property in the United States and the third hotel under the EAST brand, after the successful openings of EAST, Hong Kong in Island East in 2010 and EAST, Beijing at INDIGO, Beijing in 2013.

"Interest on the part of premiere hospitality companies in flagging a Brickell City Centre hotel was robust due to their desire to secure a prime location in the tony Brickell market and due to the inclusion of luxury retail in our project," said Stephen Owens, President of Swire Properties Inc. "We were ultimately able to select from among ten upscale hotel brands in choosing Swire Hotels' EAST for our flag."

Brian Williams, Managing Director of Swire Hotels said "We are very excited to be expanding our portfolio to the United States with EAST, Miami. Our hotel aims to create different and surprising experiences that complement the lives of our guests and enhance their lifestyle. EAST is designed to meet the needs of travelers in Miami whilst complementing Brickell City Centre's offerings." 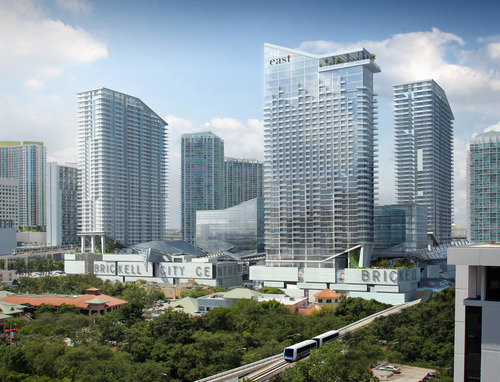 Designed by award-winning architecture firm Arquitectonica with interiors by New York-based Clodagh Design, EAST, Miami will offer 263 rooms and 89 serviced apartments known as EAST Residences, essentially long-stay hotel rooms with kitchen and laundry facilities, amidst Brickell City Centre's over 5.4 million square feet. Meeting rooms, common areas, guest rooms, and serviced apartments boast beautifully modern décor. Created for travelers looking for a contemporary, fun and relaxing place to stay, EAST, Miami will feature a paperless arrival and departure experience and a one-stop front-desk Guest Experience team. Swire Hotels will bring its award-winning skills to the restaurant and bar mix with dynamic pulsating restaurants and bars to be unveiled later. Alongside two restaurants, a poolside bar & lounge and a rooftop destination bar, there will be meeting rooms and banquet halls with bay views, an outdoor pool deck which can be used for private events that includes an outdoor and plunge pool, a 24-hour fitness center and wellness treatment rooms. In addition to these amenities, travelers will enjoy the property's floor-to-ceiling windows, multi-control panel for blinds and mood lighting inside the rooms, complimentary Wifi throughout the property and the largest average room size among hotels in Miami.

Swire Hotels recently announced the opening of The Temple House in Chengdu, China which will be the group's fifth hotel in Asia, following The Opposite House and EAST in Beijing and The Upper House and EAST in Hong Kong.  The Upper House in Hong Kong has been named as winner in the Top 25 Hotels in Asia and second out of 25 in the World in their respective categories in the 2014 Travellers' Choice awards. In the 12th year of the awards, the world's most outstanding properties were identified in the categories of Top Hotels, Bargain, B&Bs and Inns, Family, Luxury, Romance, and Small Hotels.

The project's first phase includes a luxury shopping center, two residential towers, a hotel with serviced apartments, a wellness center and a Class A office building.  The project is LEED-registered for Neighborhood Development - currently one of the largest in the U.S.  Sustainability elements include the exclusive CLIMATE RIBBON, and elevated trellis composed of steel, fabric and a continuous surface of glass that will connect all components of the development and create a comfortable microclimate for shoppers.  As the largest private-sector project currently under construction in Miami, Brickell City Centre began vertical construction in 2013 and the first phase of completion is scheduled for the end of 2015.