According to data compiled by STR and STR Global, the Americas region recorded positive results in the three key performance metrics when reported in U.S. dollars for July 2012.

Performances of key countries in July 2012 (all monetary units in local currency): 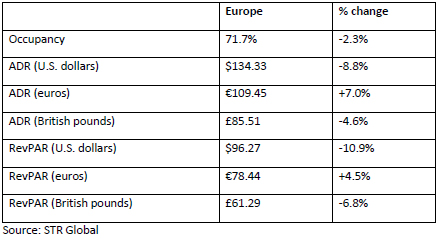 "European hotels reported a solid increase in average room rates for the month of July when measured in euro terms (+7.0 percent). However, this is coupled with the third consecutive month of small occupancy declines", said Elizabeth Randall Winkle, managing director of STR Global. "With the Olympic coverage taking over a bit from the ongoing troubles in the eurozone, London (U.K.) hoteliers reported weaker occupancy performances in June and the non-Olympic days in July compared to last year. We receive monthly results from more than 422 hotels in London and results for July reflect that the first four days of the Olympics during July could not offset the weaker occupancy in the early part of the month. London reported 80.7 percent occupancy (a decline of 11.1 percentage points) and £166.34 average room rate (+8.8 percent) compared to July 2011. This occupancy result for July 2012 still puts London into the top eight out of 31 European capital or gateway cities, which we track on our European Hotel Review. Given the most of the Olympic events occurred in August, a bigger impact, especially in ADR terms, should be visible in London's August results".

Highlights from key market performers for July 2012 include (year-over-year comparisons, all currency in euros):

The region's occupancy decreased 4.9 percent to 56.7 percent during the month, its average daily rate increased 2.1 percent to US$140.67 and its revenue per available room fell 3.0 percent to US$79.72.

"When measured in local currency, Beirut (Lebanon) reported sharp RevPAR declines (-39.2 percent) for July 2012 compared to last year as the Syrian crisis has deterred travellers to neighbouring Lebanon", Winkle continued. "July is the first month that average room rates and occupancy declined by around 20 percent".

Highlights among the region's key markets for July 2012 include (year-over-year comparisons, all currency in U.S. dollars):

Hotels in the Asia/Pacific region experienced mixed results in the three key performance metrics for July 2012 when reported in U.S. dollars.

In year-over-year measurements, the Asia/Pacific region's occupancy decreased 2.2 percent to 68.3 percent, its average daily rate ended the month virtually flat with a 0.2-percent increase to US$136.06 and its revenue per available room was down 2.1 percent to US$92.86. 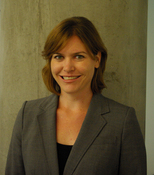 "Thailand and French Polynesia were the two out of 15 countries tracked on our Asia/Pacific Hotel Review that reported double-digit RevPAR increases for July 2012 compared to July last year", said Elizabeth Randall Winkle, managing director at STR Global. "Thailand had its best July occupancy performance since 2006, with 67.8 percent for July 2012, just beating its July 2006 performance of 67.1 percent. Its ADR (THB3,062) for the month is still below its July 2008 peak of THB3,315. We have seen demand for hotel accommodation across the country increasing for the seven months this year (+10.3 percent) resulting as well from the increase in international visitors, especially from China, as reported by the Tourism Authority of Thailand".

"French Polynesia also reported its best July occupancy since July 2006 achieving 70.4 percent for July 2012, beating the last peak of July 2007 (68.1 percent). After the heavy occupancy declines seen in 2009 due to the global economic downturn, the islands had been reporting monthly occupancy and demand increases for the majority of months since 2010. A reduction in room inventory in the same period has helped to boost performances. Looking at the average room rate, July 2012 was its best performance of a July in the last six years".