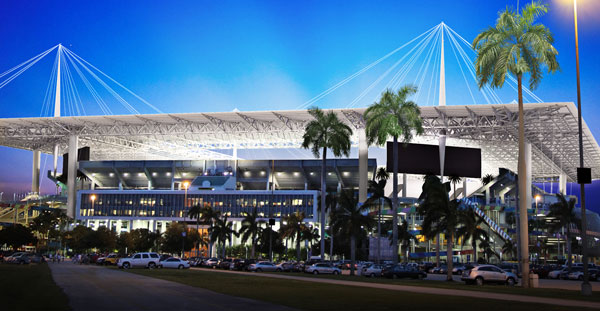 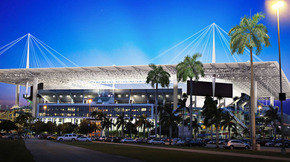 Let the game begin--that is, the contest between Miami Dolphins' owner Stephen Ross and residents of Miami-Dade County--over whether the team's owner should get public dollars to help renovate SunLife Stadium, where the team plays. The renovations are estimated to cost $400 million, 51% of which the team owner has said he would pay for.  Much of the rest may be paid for by an additional one cent added to the Miami-Dade bed tax, although the increase would not apply in Miami Beach.

On Monday, County Mayor Carlos Gimenez, and the Miami Dolphins announced that any potential deal to use taxpayer money to renovate SunLife Stadium would be subject to a binding public referendum, after Ross had resisted the idea of a referendum for two years or more. A special election would cost as much as $5 million, according to county officials. At this writing, it is not clear how the election would be paid for.  After the county referendum, the state legislature has to approve changes to state law for any deal to come to fruition, according to a statement from Gimenez. Plus, the county commission must approve the public referendum, it said.

In addition to the penny that would be added to the county tourist tax--making it 7 percent, rather than the current 6 percent--if the Dolphins owner has his way, he would also get a new, $3 million annual taxpayer subsidy from the state of Florida for the next 30 years to operate the upgraded stadium.

The announcement of the referendum came as a surprise to Miami-Dade residents. An impromptu press conference called by the county mayor, was announced on Saturday and held at 8:15 a.m. Monday morning.

From the beginning, requests for a taxpayer subsidy for SunLife Stadium had met with resistance from many residents and politicians in Miami-Dade, because of what has generally been considered a bad deal for the county that officials signed on to in 2009 with the Miami Marlins baseball team. The Marlins contributed roughly $120 million and agreed to pay between $2.5 million and $4.9 million per year for 35 years to pay back $35 million of debt the county borrowed for the $640 million stadium, located in Miami's Little Havana neighborhood, according to the Miami Herald.

Andrew Zimbalist, a sports economist and the Robert A. Woods professor of economics at Smith College in North Hampton, Massachusetts who has also consulted on the issue of the economic impact of sports stadia for over 20 years, says  "No one should expect an economic payoff," from a renovation of SunLife Stadium, adding that he doesn't think that the team will move if it doesn't get its way.

"There's often the sense that you can (levy) a tourist tax, so that local citizens don't have to pay for it," and that "people are supposed to think that (the subsidized project) is a free good," says Zimbalist. "But that doesn't work out, because if you can raise your bed tax by a penny and not affect the amount of tourism or business travel, you can do that anyway and use the money to improve (public) infrastructure or contribute to schools," he says.

"But raising a bed tax may discourage some business travel, in which case, you are hurting your local economy," says Zimbalist. "The idea that a bed tax won't fall on local residents is wrong," he says. Furthermore, there are many places where stadia have been privately financed, as was the case for the stadium outside of Washington, D.C. for the Redskins, and the one built for the New England Patriots in Foxboro, Massachusetts, just to name a couple of examples, says Zimbalist.