According to Real Capital Analytics the latest Australia Capital Trends report, Australian commercial property sales activity set a new annual record in 2021 of $70.8 billion, climbing 69% on a subdued 2020 deal total as industrial megadeals and sizable retail transactions returned some vigor to the market.

Office and retail buildings dominated the list of biggest single asset transactions for the year, but it was portfolio deals, which took the spotlight in 2021. Blackstone and GIC were involved in the two largest industrial portfolio deals: Blackstone purchased GIC's 49% share of the Dexus Australia Logistics Trust (DALT) for over $2 billion and sold its Milestone Logistics Portfolio to GIC for $3.8 billion, the largest direct sale in Australian commercial property history. For the fourth quarter and the year in total, industrial sector deal volume surpassed that of offices.

The retail sector ended the year on a high with several significant shopping centres changing hands. Deal volume for the fourth quarter rose to $5.8 billion, bringing the annual spend in the sector to $17.2 billion, above the annual average seen in the five years before Covid struck.

Benjamin Martin-Henry, RCA's Head of Real Estate Research commented, "The retail sector has seen significant increases in acquisition volume in 2021 compared to previous years; but, overseas buyers have demonstrated limited interest. The near 140% increase in retail transactions is almost purely driven by domestic investors who appear to be warming to the sector once again."

After a slow start to 2021, the Sydney office market ended the year as the number one investment market in Australia once again despite persistent uncertainty surrounding the future of offices. Sydney office sales increased 48% on 2020 volumes, with overseas investors accounting for around 60% of the total, their highest share in over a decade.

The five most significant office deals involved offshore buyers, such as Blackstone acquiring a 50% share in Grosvenor Place for $925 million and U.K.-based investor M&G Real Estate teaming up with Mirvac to acquire EY Centre for $579 million.

Benjamin Martin-Henry said, "Investors have shown a lot of faith in the Sydney office market with some significant transactions over the last year. We also have another $2 billion worth of Sydney offices awaiting settlement, which is a promising sign."

Overall, Australia was a top performer in 2021 compared to its global counterparts. Based on RCA's global deal size floor of US$10 million, Australian volumes were double those of 2020, which is a similar increase to that recorded by the United States. Closer to home, Singapore has been the standout performer, with volumes up over 170%. Hong Kong and China recorded double-digit growth.

David Green-Morgan, RCA's Head of Real Estate Research, Asia Pacific said, "The Australian market has bounced back significantly better than many of our global peers, particularly in the office and retail sector. Australia is one of the very few major markets that saw retail volumes increase on pre-Covid averages." 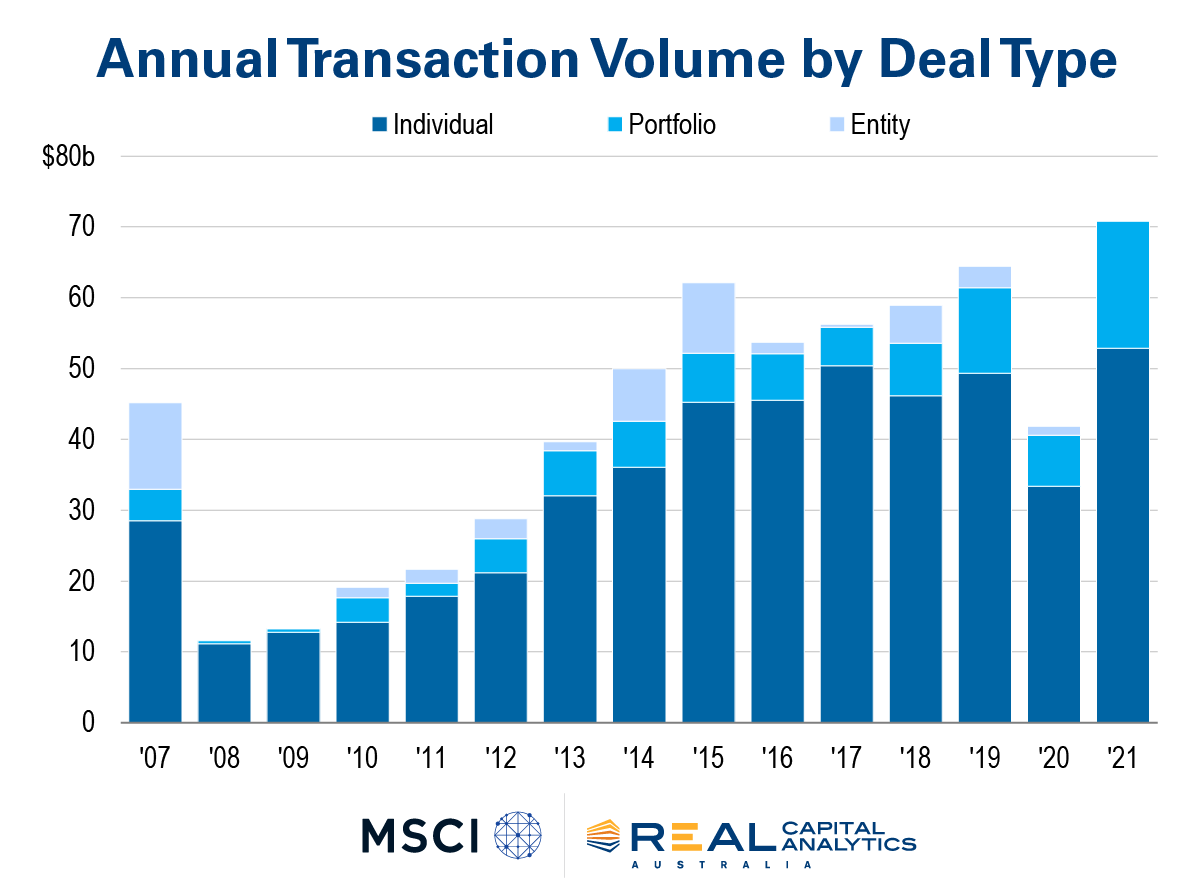 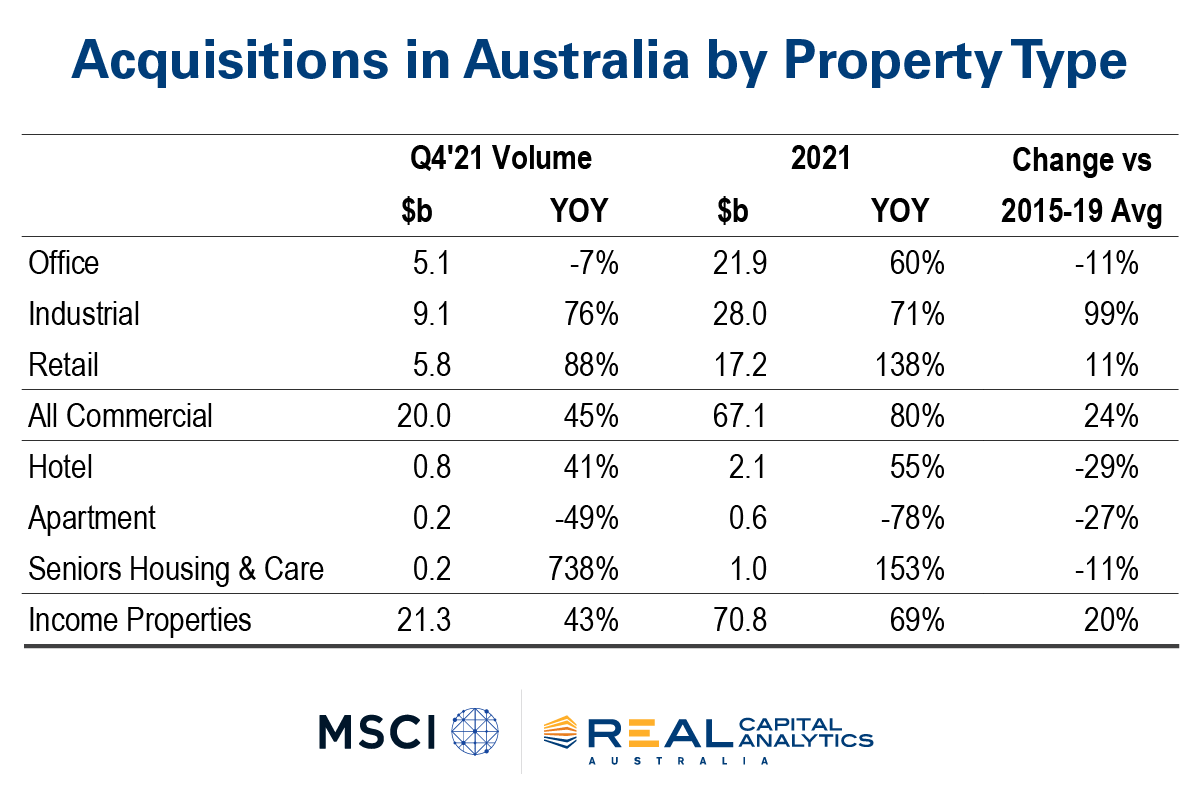 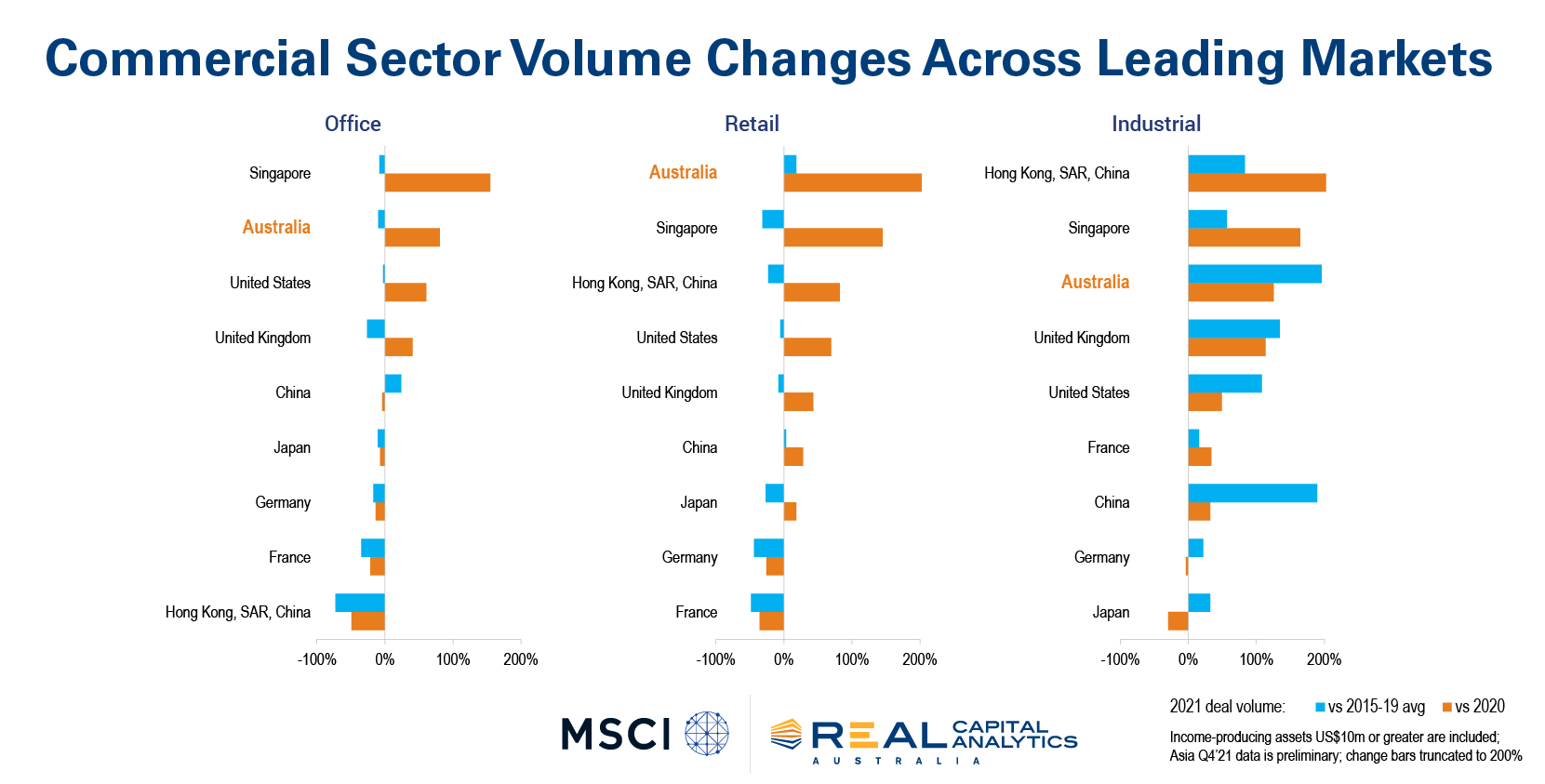