Foreign Investors Drive One Third of Commercial Investments in Australia


According to CBRE, Australia's commercial real estate remains an attractive asset class for offshore capital, with foreign investors accounting for 33% of all transaction activity in the first half of 2017.

New CBRE Research shows Asia remains a key source of this capital, with approximately $1.6 billion of Asian outbound capital directly invested into Australian property in the first six months of 2017.

While this was 25% lower than in the 2016 corresponding period, CBRE's Head of Research for Australia Stephen McNabb said this needed be viewed in the context of a market where overall transaction volumes fell by 37% in AUD terms.

"Foreign investment still accounted for approximately one-third of all activity in Australia's commercial property sector, with demand for assets remaining strong given the higher yields and strong fundamentals demonstrated by the Sydney and Melbourne markets," Mr. McNabb said.

He attributed the fall in investment activity to a lack of available stock rather than a decline in buyer interest and noted that Australia had been ranked as the number one destination for cross border capital in CBRE's 2017 Investor Intentions survey.

"At this stage of the yield cycle - which is nearing its peak in Australia's major markets - and with a reasonable immediate outlook for rent growth, there isn't a compelling reason to sell assets. From an investment perspective, assets remain eagerly sought after and this is evident in further yield compression across all assets classes nationally in the first half of 2017," Mr. McNabb said.

CBRE Research shows approximately $45.2 billion of Asian outbound capital was directly invested into global property in the first six months of 2017, representing a 98.4% uplift on the $22.8 billion allocated in the first half of 2016.

Strength in Asian outbound investment was led largely by the preference of investors for big-ticket deals in the global real estate sector. In the first half of 2017, 74% of committed investments were deployed into transitions valued at $250 million and over, versus 56% in the corresponding period in 2016.

Geography-wise, Asian investors remain bullish on Europe, Middle East and Africa (EMEA) and the Americas, which drew $21.9 billion--driven largely by a single $13.2 billion from the logistics portfolio purchase--and $11.3 billion in capital, respectively. Intra-Asia investments continue to grow, finishing the first half at $10.4 billion and representing a 23% growth in total capital.

Sectoral diversity also continues to be a major theme within asset strategies, with Asian outbound investors rebalancing real estate portfolios internationally. Office and logistics are the most attractive sectors, accounting for 44% and 34% of all committed capital throughout the first half, respectively. Residential (7%), hotels (7%), retail (6%) and specific sectors like aged-care housing (2%) remained niche investments globally.

Outbound investment from China remains the region's largest despite heightened regulation, with a new group of investors more active over the first half. Chinese sovereign wealth funds (SWFs) emerged as the largest single outbound investor class in the first half of 2017, driving total capital deployment to $25.6 billion versus $10.1 billion year-on-year. China-based property companies and conglomerates have also been considerable buyers of offshore real estate assets in the first six months of 2017.

Recently, a new round of capital controls issued by the State Council and the National Development and Reform Commission (NDRC) on August 18 was issued, with a focus on offshore real estate investments. However, according to CBRE, this regulatory move may not affect the medium to longer-term appetite for outbound investment, but potentially re-shape investment strategies going forward.

"New regulations should help to ensure that future outbound investment is more financially sound and strategically focused, but the impact of Chinese capital on key global real estate markets should continue for some time." 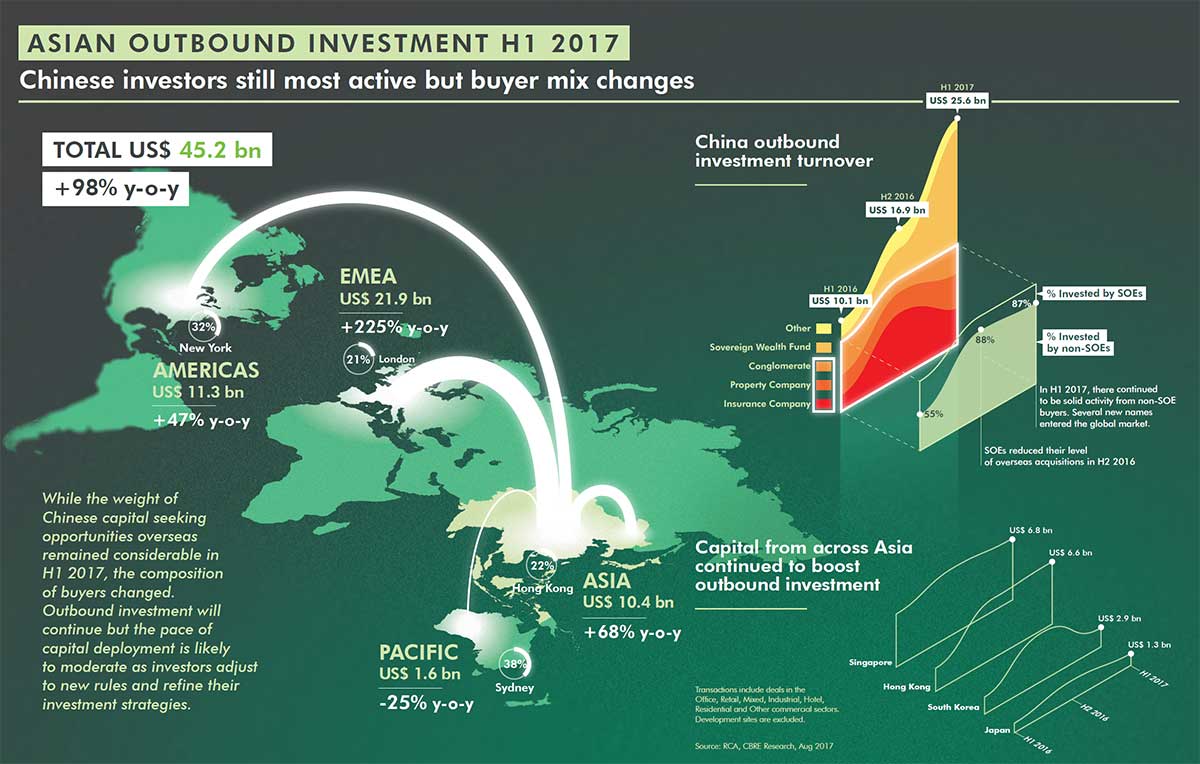