Sydney is Highest Appreciating Luxury Housing Market in the World 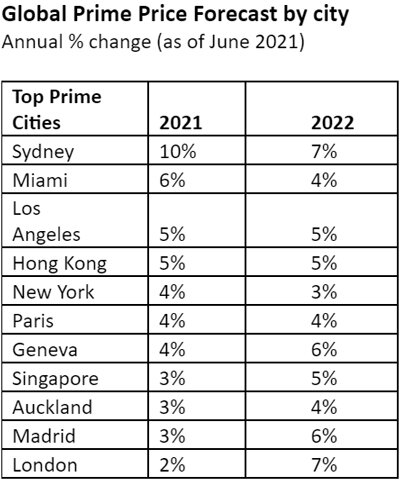 Since the start of the pandemic Knight Frank's global research team has undertaken three prime price forecasts, with the average overall forecast tracking higher each time. Back in May 2020, Knight Frank envisaged prime prices climbing 1% on average in 2021, this changed to 3% in December 2020 and in July 2021 now sits at 4%.

Revealing what has driven the forecast, Kate Everett-Allen, head of international residential research at Knight Frank said, "Government fiscal stimulus measures have been revised upwards, protecting jobs and incomes via furlough schemes meaning there have been few forced property sales. Banks in key developed markets offered mortgage holidays to customers reducing repossessions and foreclosures. Households accrued a total of over $5 trillion globally in savings during lockdown, enabling some homeowners to undertake home improvements but others have opted to relocate, upsize, downsize or buy a second home/investment property."

Tax and lending incentives also motivated buyers. From stamp duty holidays to relaxed loan-to-value ratios many householders took advantage of lower purchase costs and/or accessed mortgage finance with smaller deposits. Construction rates slowed due to lockdowns and social distancing exacerbated the lack of new supply in several key cities putting upward pressure on prices. Changes to working patterns prompted some homeowners to rethink their lifestyles rendering the five-day commute obsolete for some industries and enabling a move to the suburbs or countryside.

The award for most improved market goes to Sydney with our 2021 forecast rising from 3% in December 2020 to 10% in July 2021, a rise of 7%. Closed borders have seen wealthy Australians purchase at home instead of abroad. The first quarter of 2021 saw 1,429 prime sales recorded, the highest quarterly figure on record for Sydney and despite recent lockdowns momentum is being maintained.

Hong Kong and New York aren't far behind Sydney with their 2021 forecasts shifting up by 5% and 4% respectively between December 2020 and June 2021.

According to Martin Wong, head of research and consultancy at Knight Frank Greater China, "Despite four waves of the virus, Hong Kong's luxury residential market has proved resilient with several transactions of note taking place in The Peak and Mid-Levels in the first half of 2021. Economic forecasts have been revised upwards, 35% of the population has now had their first vaccination and sentiment is improving with capital flows from the Chinese mainland a key driver."

The outlook is even more upbeat in New York. As Liam Bailey, Knight Frank's Global Head of Research noted, "New York is back, restaurants are crowded, flights are packed, the Yankee Stadium is at full capacity and corporate America is calling its workers back.

Much like London, the 4% price growth we envisage in 2021 will mark New York's return to positive price growth for the first time since 2018 and its strongest performance since 2015

Prime markets have arguably operated against a more challenging backdrop during the pandemic than mainstream housing markets due to their strong international bias and the stringent travel bans put in place. For some cities this means it's likely to be 2022 before the effects of looser travel arrangements starts to be felt and prime sales gain traction, but for other cities such as Miami, Auckland, Hong Kong and Geneva their domestic prime buyers are compensating for the absence of non-residents.

The outlook for prime residential markets will be closely tied to the ease with which cross-border transactions can start to normalize, and whilst virtual viewings and improved technology have assisted in this area, the reality is the resumption of commercial air travel will be key.